“Why there is continuity”

Introduction to the general theorem of continuity

6/8/14 draft –   Perhaps it just seemed too obvious to ask before, or maybe other scientists hadn’t found a reasonable way to do it.      Continuity underlies every principle of physics and all our observations of nature, that “things are connected” but also some how all “individual” and “disconnected” too.  Still, we find seemingly without exception that the future is built on the past and that change generally incorporates flowing processes of change, but working with all sorts of disconnected parts .    I found it particularly fascinating, that “flows” both contained and often turned out to become “disconnected parts” of larger scale flows, exposing how continuities and discontinuities appear to be mingled at every scale of natural designs.   My professors and equations simply never spoke about that.    The implications led me to: 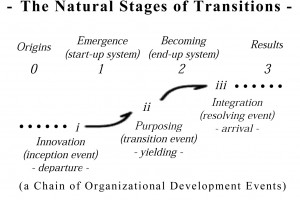 A law of emergence and continuity in change

The way I eventually chose to answer “Why is there continuity?” was with a mathematical proof supported with readily available evidence.   The proof demonstrates that the “first principle of physics”, the  “conservation of energy”, implies that any individual event of finite duration needs to originate with a punctuated developmental burst of organization and energy flow.   Then the review of the evidence strongly suggests that so many of the observable kinds and scales of events clearly fit that model.   It suggests that events of all kinds must be predominantly be “individual” and “finite”, and so even when “predictable”, not “predetermined”.    The proof starts with:

The unexpected and all important discovery is that the simple statement of energy conservation, that the sum of energies within a system is constant and finite, implies that the rates of change of energy entering or leaving a system are finite if unconstant, and that,

An important added ‘lemma’ can be left to the reader, that while change in nature is often usefully “predicted” by equations, the principle of continuity indicates that nature clearly cannot be “occurring” by equations.   What seems evident is nature operates by a process of making and then breaking her rules, not by following them as we need to use them for.

The principal evidence is the everpresent “S curves” in our measurements of change, that when looked at closely reveal complex organization and with graduated accumulations of change.   The trick for following them is perhaps mostly to be patient in searching all the possibilities, as frequently what appear to be breaks in continuity are places where the connections are at some other scale, seen from some other view, or of some other kind.   Observation is ‘fragmentary’, but nature is ‘holistic’ in profound ways, and the question is then “Why?”

Related posts introducing the natural cycle of system transformations and how to use them for researching and responding to the systems of our world include the most detailed general diagram: “Chapters of a whole event” and articles in the general category: “Scientific Theory“.   There’s also my “1990’s Archive of empirical studies” and the following recent more general introductions from various approaches:

One thought on “The key scientific question”