“I’ve found this research really interesting, as it goes (finally!) against our deepest beliefs in human (in) ability to collaborate and be socially engaged without specific behavioral rules. People behave socially and ‘well’ even without rules Fundamentally people behave in a social and rather compassionate and ‘good’ way rather than aggressively, even without specified rules.”

I think the more useful relationship is that “rules” for how to behave quite often just affirm how things work best naturally.   So *rules follow people rather than people follow rules*.  Every sort of “system” is recognized as embodying an emergent sets of rules that work.  So, social rules that describe what’s been found to work in the world assure that people are free to behave the way they’d mostly want to anyway.

They’re also remarks about the whole self-organizing system of relationships displaying them, whether you call it a community, culture, nation, niche, commons, world, language, or movement, etc.   Those rules, of course, may also need to change as the world around them does.   It means that rules inherently also represent stages of learning for a system, not end points. That’s often the real source of friction, as old rules clash with the need to find new ways of making things work.  My comments below expand on the way we find rules that work, as “niche making”.

Simple examples of self-organization like those really help.   The common habit of explaining everything with deterministic rules needs to be shaken gently, it seems.     I tend to not find cooperation as deterministically caused, for example, but opportunistically discovered.    One easy way to pick it out is with seeing how niches for innovation form in the gaps between and to connect other things. 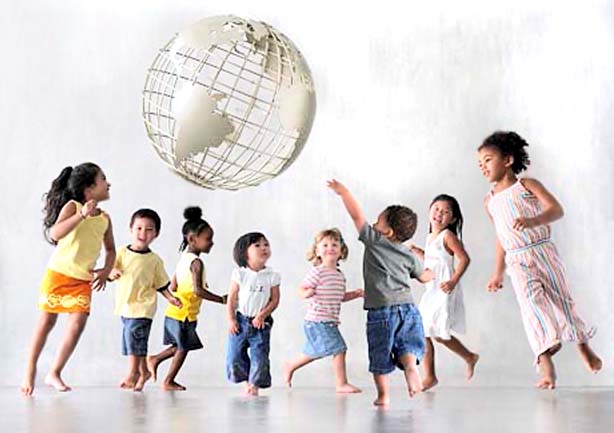 After years of working with simple examples to help me separate those two paths to causation, I think the deterministic and self-organizing aspects of nature fit together just fine.

Seen as a difference between “imposed” and “discovered” causation can also then be understood as between “remotely determined” and “locally developed” causation.   Examples of the latter might range from the opportunistic formation of a rust pit, on what had been a smooth shiny metal surface, or of social subcultures taking off in some whole new way.

One benefit of closely watching how social behavior results in cooperative interdependence and consideration for others is that it allows any good observer to study highly personal examples of the intimate details of opportunistic pattern formation.   Being a “local” event allows opportunistic pattern formation to be identified in a great variety of places under the broad idea of “niche making”, as a very general design strategy in nature.

Niches evolve when one organism, life-style or local behavior finds a way to thrive without conflict in the midst of others, building on some kind of local specialization.   That such an organism, life-style or behavior cell finds a way of using the resources around it that others don’t know how to use permits it to operate unhindered.   One can see that in the intensely bio-diverse communities of fresh water ponds, or ecosystem “pods” in the Everglades, with each organism having evolved a secure domain for itself, as well as providing a secure role in a larger food web for its ecology, at the same time.

Some of my favorite personal examples are watching the behavior of “affinity groups” in the neighborhood or the office, and how each develops its own local “language” of connecting issues and manners.   In social networks I like studying the emergence of subcultures that sometimes upset their environments, like Hip Hop, sustainability, feminism, or the quixotic media and political world “frenzies”…, and how being “in the loop” for one generally also places you “out of the loop” for many others.  ;-)

There are many other ways to extend this discussion.

You also see the same pattern in the complexity of vibrant life in great cities, also nicely described by Jane Jacobs.  In cities people invent diverse cooperatively-competitive roles by creating secure niches for themselves that they make instrumental for others. Whether they are aware of that dual purpose is often unclear, but it seems only strategies that provide both advantage and security survive.

That kind of niche making that starts as forming a secure domain for something would also also then provide secures links between others to form networks of complementary roles.   That of course, is also famous as the way diverse kinds of local specialization create the networks of roles that allow economies to thrive as well.

It’s the diverse services provided the development of individual niches that let a whole urban culture thrive from the competitive-cooperation of the parts.   In a growth period the increasing complexity that results sometimes enhances the vitality of the whole network, or the opposite.

How to understand economies as self-organizing systems is one of the subjects I’ve spent the most time on, both because of the general and particular interest, the usual familiarity of the subjects, and plentiful data.   Economic data exhibits lots of evidence of nature having ways of “connecting the dots” and creating whole systems societal self-organisation.

They provide excellent “hiding places” for discovering who we are and how we are changing, in ways humans are generally quite unaware of.   It then also makes that data both fundamentally important to understand, and to make the struggle to learn the new scientific reasoning needed a potentially very personally meaningful exercise too, such as for A decisive moment for Investing in Sustainability.

Niches are also fascinating to study as “behavior cells” for how the workings of self-contained networks tend to be hidden from external view.    That outside observers are then  “out of the loop” as far as their internal processes, they become voids in the information that might be gathered, as if “holes in phase space” for that observer.

It leaves any observers viewpoint of how their world works more like “Swiss Cheese”.  Introductions to that approach are in Coping with every culture having a different reality! (& what’s multiplying them)and Are the holes in your map helping you read the territory?.

As behavior cells, like organisms, cultures or businesses, it’s the internal accumulation of design, developing by the local system working by itself, that becomes its “natural capital”.   The structure is not mapped from elsewhere but self-contained in its relatively hidden internal working parts.   Many external inputs and outputs may be visible, but generally not what roles they really play internally.   That source of “missing information” may be exceedingly important to recognize, though, as causing the mystery of economic “externalities”, and providing analytical means for “internalizing” them as direct physical effects of using money, as in Systems Energy Assessment (SEA).

The study of niches as the homes of self-organizing systems needs to include considering them as individual “events” of accumulative design over time, from beginning to end.   It brings out the shifting structural roles of their internal development processes.

A starting point is the normal succession of 5 distinctive organizational stages, very often recognizable in records of their history, considered as “learning curves”.  Organizing them this way turns their histories into objective “maps” of their complex developmental story.   The use of such learning curves from a physical science view is introduced with the physics it is based on in “Chapters  of a whole event“ and in the collection of preliminary research applications of the methods developed in the 80’s and 90’s as “The physics of happening“. 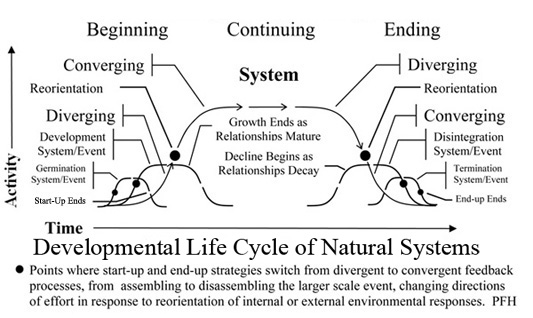 One way to start thinking about that critical change from expanding control to cooperation is in What goes wrong when growth ends before its limits?.   Others are in many other places in my blog and on my site, like Bump on a Curve ¸¸.·´ ¯ `·.¸¸  Notepad For Dummies, and my general introduction to my areas of research: Open Systems Physics

One thought on “Self-organization as “niche making””