“Sustainable Cities” is the topic to being the upcoming Open Working Group 7 on SDG’s, Jan 6-10 2014, in the UN’s marathon effort to decide “what we should do with the earth”.   Our cities, as brilliant as places of creativity as they are, find themselves “in a fishy stream…”  See also the final World SDG proposal on the global application of the general principle, that we all are responsible for our shares of the abuses of the economy as a whole … in proportion to our owning, investing in and using it.

The World SDG uses a method of calculation for any person’s or business’s share of world GDP, for estimating their total share of  responsibility for world economic impacts as “users” called “Scope-4 Accounting“.  The legal view of responsibility is different from “cause and effect” in that, legally, both the people paying for, benefiting from or authorizing a tort harm may all be held as equally responsible as the person actually doing the harm, as familiar for hiring others to commit a crime. 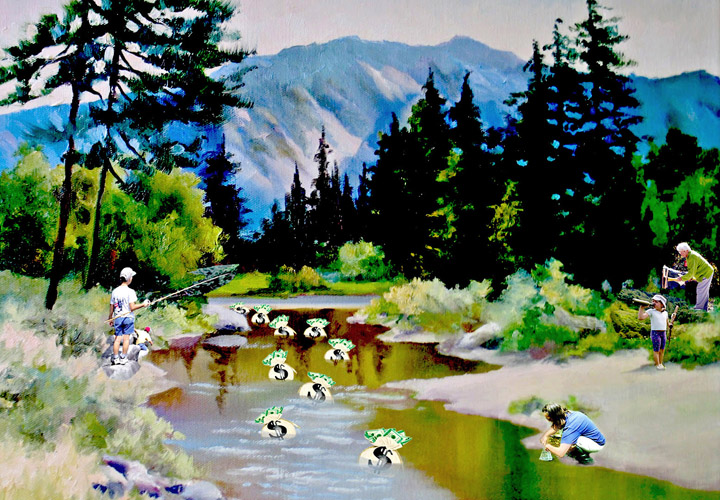 Fishing in a fishy stream…

A scientifically better way to measure the true scale of economic footprints is as fractions of the whole.  It’s easy and accurate for scale, treating fractions of world GDP as shares of world resource use and impacts too(1).  Cities thrive as hubs of creativity and growing concentrations of wealth, cells within a greater whole. Without self-restraint, growing parts can become cancers on the whole, profiting by conquering others, not by caring for their world.  A city’s limit is then exhausting their world, as done by ancient Rome, the Mayans and others.

The question is, what would make New York and other cities turn from consuming to caring for the world they generate their wealth from(2)?   Now each World Capital, as islands of high GDP, is growing its impacts on the world by growing amounts each year, as if as innocently as living by a lazy stream grabbing floating bags of money going by now and then..                Jessie Henshaw

Jessie is an environmental and human systems scientist quite familiar with defining units of measure. She’s been doing advanced research on emergent organization in nature and economic systems for over 30 years. The scientific basis for this measurement method is a peer reviewed research paper

1)“Getting the incentives right requires redefining the units of measure”.