Science is also about asking particular kinds of questions, so you’d be missing a lot if you didn’t also ask “What kinds of questions is that?”…  and end up getting to the “big picture” by asking “But then,… doesn’t any question both open your mind to one thing and close it to another?”

So that more precisely defines science is a kind of “open territory” of all the kinds of questions one might ask, hoping to find ones that are particularly “informative” and give us unexpected “insight”, while keeping us clear of “jumping to conclusions” and other pitfalls.   It’s a long process of bending our minds to fit the world we seem to be part of, finding ways to both “get along” and to bend the world to suite us, guided by the landscapes, pathways, open skies and hidden traps of “understanding” and “misunderstanding”,talking to “busybodies” and “not so busy bodies”, that one finds traveling beyond “The Phantom Tollbooth” (ref the Juster & Pfeiffer masterpiece). 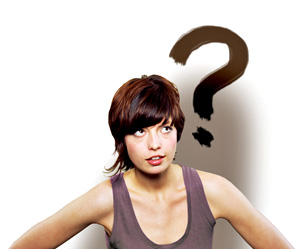 What have you been wondering about…?

One of the very most informative and useful questions I ever asked is “What is nature hiding from us?”.  That question came to me about 25 years after my first highly productive question of the kind. which was “what makes life so lively?”    I’ve had SO much fun with both those questions I really cannot tell you!    I don’t feel compelled to “look under every leaf and stone”, but having asked those two questions, using them as a kind of “lens” for studying what’s happening around us, it has made it quite likely that in any natural hiding place I look I’ll find traces of things “making life lively” as a way to study what they’re doing and how, along with leading questions about where they’re headed.

The main answer to “What is nature hiding from us?” is simple, though.  Because our reasoning minds collect information as an observer of the world, anything we see organized from the inside we see from the outside, as if from a distance.  So as a consequence what nature is hiding from us is ALL the information about how her living systems work by themselves.  They’re what make life lively, developing their organization from the inside as they grow, built up around however they began!!

That observation is itself an immensely satisfying and delightful answer to some scientists, as a vast opening of a door, to recognizing what we’ve been missing about our place on earth…   It also, very sadly, causes considerable offense to others, as a simply ridiculous insult to the methods, purposes and great usefulness of their social cultures and systems of belief, not to mention incomes.    Ultimately those two views boil down to “a choice” of which half of the universe your questions will keep hiding from you!   ;-)

One might say, to “simplify” the job of explaining the world, as Niels Bohr and Heisenberg did, (paraphrasing) “Who the heck cares about what nature will always hide from us!!  Science can only work with information, not questions with no answers!   Uncertainty is sure to be irrelevant to our concerns except as statistics anyway, won’t it?”    I kind of wish that group of scientists would just ask at face value the “dumb question” implied in that retort.

Are statistics the only value of having uncertainty about what’s “out there”
beyond what our information tells us??

I think it’s better to see it as a choice to make, whether a situation calls for using one assumption or the other, considered as a simple choice to use one or the other “lens” for asking other questions.   Things inherently hidden from view might just possibly be quite important to us, right? 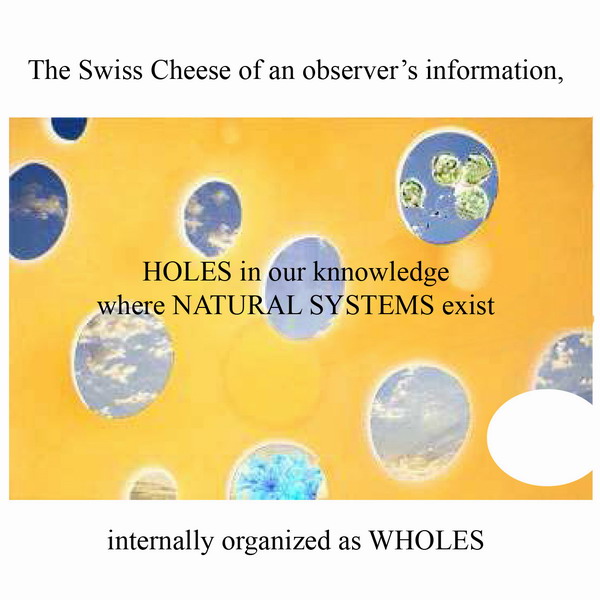 The design of natural systems as living cells of organization, is a VERY VERY big thing for nature to hide from us, of course, VERY BIG!   It’s everything built from the inside, seeming to employ very lively and changing kinds of organization and relationships, all as ways of sustaining the uses of energy to do it, and all generally hidden from our view.    So, on first hint of something “out of the box” like that, perhaps all one can say is “Gee whizz!” or “Don’t be ridiculous” or other quick reactions…

…and the scientist in you will come back to the unanswered quandaries
again and again till you find an opening,
like a stubborn foraging animal on the trail of the next good meal.

“What in the blazes is doing THAT?”

The fairly clear evidence is so systematic, it appears there is some very

real system of organization,
hidden from our usual assumptions of “how things work”

…With both the share of the population participating in the labor force declining, and the participating labor force finding it easier to find work…  could it be true that the US “growth economy” is doing that entirely “non-growth” kind of behavior?

Does it really mean there are relatively “fewer jobs”
that are also “easier to find”  ???

Yes, it seems so, but you have to sort through whole stacks and baskets of old assumptions, that apparently no longer hold, to find some new kind of “general model” to think about the economy with, when some deeply contradictory evidence like this is presented.

It’s a time when “the really dumb questions” one might ask, may well either be “just plain dumb” or “stupendously brilliant”, though.   They might happen to uncover things nearly everyone assumes everyone else already knows, and so no one asks thinking to avoid the embarrassment of “looking dumb” in asking… 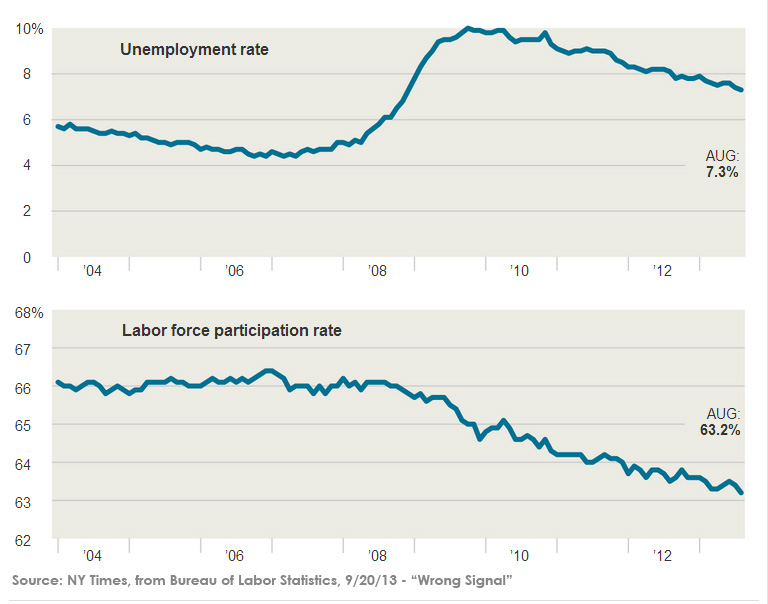 What is the world is happening here!!
Unemployment and Employment, both going steadily down together ???