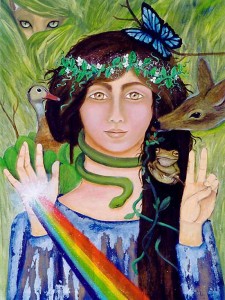 The primary duty of the home maker, considering a family as a link on a chain of living culture, is to be the guardian of its flame of life and continuity as a culture.  Its living culture illuminates the home with its light and life, as the home serves as the commons within which the family culture inherits and passes on its traditions as family members live for each other, sustaining an “all for one” life of a true commons (Hestian culture).

Keeping the home light alive has historically been the primary role of the women of the family, whether they got credit for it or not, as 1) “they are there”, 2) have in abundance the particular talents and interests needed and 3) the men generally have duties elsewhere, serving the authoritarian business cultures of the society’s public space, working their ability to extract wealth from others as “the rulers rule” for serving their authoritarian systems, organized around an “every part in opposition”, way life (Hermian culture), a boom and bust machine.

So it’s a split between the free sharing of “profits” that one naturally finds wherever there is “private space” and the invasive cultures using profits to claw more profits, that came to dominate the “public space” of our society.  The “domus-centered” (domestic) life evolved first, and “polis-centered” (political) life second, exhibiting starkly different principles of economics.  One naturally balances resources in the interest of its whole culture; the other maximizes inequities for an invasive culture.

As an authoritarian organization, a business rewards employees who are good at helping the business owners succeed in exploiting others, for serving the greater greed of others, defined clearly in “the rules of the business”.  The business sets its goals according to how it determines its “profits” measured as a one-way taking from its environment.   In modern business it’s not just the % rate of profit that matters.

What’s often more important to the investors who determine which are the most exploitative businesses to invest in, is the % rate of growing profit.   That comparison of profit options is what’s colloquially called, “the bottom line”, and is now programmed directly into business computers since the 1970’s.   It automates how businesses play one competitor off another, to maximize their growing domination of the living cultures around them, with ever growing demands for increasing performance from those serving the rules, and becoming unmanageable as it remains the only available work.

The key is how the two cultures display opposite principles for using the profit, living cultures “caring for themselves” and the invasive cultures “taking for themselves”.    It defines a sharp and clear difference between “home economics” (caring for the home culture) as a principle, and “political economics”(winning battles in the polis), using family cultures to sustain the people serving the authoritarian rules of the polis cultures, for becoming ever more invasive for the home cultures.

As all invasive cultures they use what they take to multiply what they take, exploiting the family cultures caring for themselves that actually hold society together.   It leads to violating the home culture’s essentially spiritual purpose of “keeping the light within” as “the sacred flame” shining through the continuity of their loves and living traditions.

Here then is the problem for us and our remarkable little groups of transformational change agents that our “commons movement” is a part of.    Our “movements for change” started springing up all over the place in the 60’s, in the midst of a culture heavily dominated by ideas of profiting in opposition to others, and some ways “ended up doing the same”.   Not understanding the difference, the transformational communities based some “action principles” on “us v. them” economic approach (exploitive/Hermian).   They “said” opposing the bad was a “new home economics” for the earth, (sustaining/Hestian), but the action principles kept using the same old oppositional logic and authoritarian rules.

At the deepest level, the difference is whether the culture using an action principle regularly tests it with “the precautionary principle”, always asking “what better use might we make of the profits”.    The math clearly tells the difference, whether you measure your success only by your take, or for the whole culture of give and take.    With the one, using the precautionary principle for one’s own action principles is a natural, automatic, and positive thing to do.   For the other it’s a seeming great offense, to question the principle of profit approved by the group as a social unit, or by an authority, same rule based authoritarianism,… either way.

Because what a system does with its profits maps its physical path into the future, those choices serve as its efficient steering mechanism.  Learning how to steer means getting people to rethink the use of the profit; to stuff one’s pockets or care for your world. That’s where the difficult rethinking will turn up… as well as the open paths to real societal transformation!            jlh