Report I. (below) 18 June – Comment to UN organizers of Final Report on MDG’s in dialog with Major Groups –  MDG solutions are not designed to hold, because the goals were defined as performance metrics not cultural growth and development.  JLH

Report II. (above) Comment to UN President, Member State Delegates and UN SDG agencies, on the UN Sustainable Development Goal Progress Reports of UN Agency and Stakeholder Groups – UN Development Goals… Leave out the common needs for a world that works as a whole: 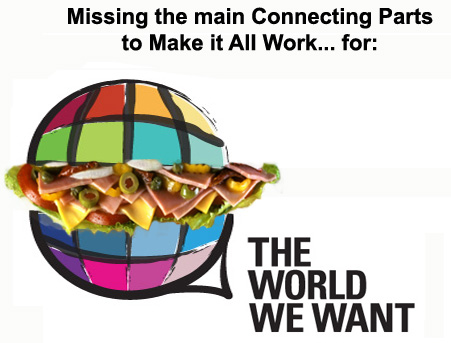 Left out are the deep common interests we ALL share, a secure world working together as a whole.

The progress reports on the UN’s Sustainable Development Goals display an inspired cultural image of the future, but tragically omit the most important practical necessities of sustainability. Over time the discussion has drifted, toward being only about sustaining ideal economic development, quite overlooking the conflicting critical tasks of sustaining the Earth. It’s been thrilling to observe the process of dream weaving online, and in the many meetings I’ve attended at the UN.   There’s clearly been a massive response from the global social networks, and an eagerness to build a new vision for our future. The vision we see forming is highly impractical though.   For me, as a natural systems scientist who understands the implications, it has been extremely painful to watch as the discussion proceeded, with the critically important steps of sustainability being consistently left out.

What it being left out is

To create a World Commons allowing individual freedom while addressing common needs only takes an accumulation of modest practical steps.

A variety of UN scientists, Major Group representatives as well as the Co-facilitators for the OWG meetings too, have also started to show impatience with the lack of practical thinking evident from the social networks.

Moving from only discussing our ideals to discussing practical means for achieving them requires overcoming an important barrier.   We don’t know how.    We don’t know how because it takes a new kind of learning.  It takes learning about how our world works, as a cultural/economic ecology, to let us see what we need to work with, and to watch how it is changing as we press ever harder on the earth’s limits.

The opening to that is for people to let their own ideals draw them into learning about how their own world works.   They need to study and explore the natural working parts of the world commons, that their ideals will need to work with.   That’s what’ll then give us ideas for how to devise practical interventions for engaging with its working parts, using our ideals (SDG goals) to lead us to effective ways to “get involved” (SDI interventions).

As we “get involved” in the cultural/economic ecology of our world, small exploratory steps would then naturally expose our larger choices, to show us lasting ones that will work, and that nature would want for us.   That’s essentially how the glorious ecologies we admire, themselves evolved as nature’s “commons”.

It’s by all the separate parts actively learning about their own world, looking for how their needs can fit.   It’s somewhat new for people to think that way, but it’s something we can do.   We just need to learn to pay attention to what’s really happening around us.

Comments for the final MDG progress report for the MDG Special Event, in New York on 25 September  2013.

A real risk the MDG solutions are not designed to hold

A wide scientific view: the MDG solutions are not designed to hold, because the goals were defined as performance metrics not cultural development.

I thank the UN and the Co-Facilitators very much for the opportunity to speak at this critical time for assessing the gaps in the MDG’s and real causes for the lagging achievements.   There is reason to think economic pressures will increase for some time, putting gains at risk and adding to failures.   Policy makers do hope the effect of growth stimulus will return to “lifting all boats”, as it did in the past. For 30 or more years the opposite has occurred, making the hope it will stop doing that wishful. There’s a new scientific explanation being discussed, for otherwise able efforts on the MDG’s having resulted in such limited and fragile success in reducing deep poverty.   The theory was already explained rather well to this session, actually, in the comments of the CIVICUS representative, Jeffrey Huffines.  It also reflects the work of UN experts Clair Melamed and Sakiko Fukuda-Parr who spoke to OWG2.  The systems ecology view I work from, helps put it in broad perspective. There’s an easily confirmed way the MDGs (and most SDGs too) are misdefined for working with the real cultural and environmental stresses they target, that also helps explain the growing economic inequity around the world.   It’s that both deep poverty and growing economic inequity are cultural learning problems, needing cultural solutions, generally neglected by defining them as numerical performance problems.   We’re often treating people and their cultures as if they can be engineered like machines. Marginalized economic communities face large and growing cultural hurdles finding a place in a world economy that increases in competitiveness and changes how it works ever faster over time, and will tend to fall further and further behind.    Cultural learning is something that comes from inside the culture, not from metrics.    If cultural learning is recognized as the real problem, policy solutions may not suddenly work wonders, of course, but they would certainly produce more self-reliant cultures. Asking cultures to “perform by the numbers” causes harm like educating students by “teaching to the test”.  It treats students as “numbers” instead of as people, robbing them of learning how to think, and their chance in an increasingly complex and changing world.   Even “growth” is a policy for driving cultures “by the numbers”, asking everyone to deliver ever greater performance by %’s over and over.   Adapting to accelerating change till you cannot keep up and fall behind, naturally produces high levels of traumatic stress for the people and communities involved.    Please have this concern expressed in your final report on the MDGs. Thank You for listening,