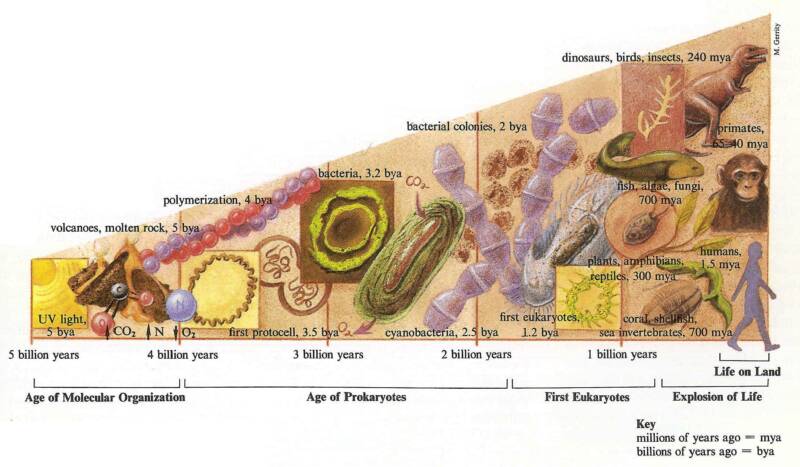 Very surprisingly, that is where the very first scientist to study complex organization in ecologies, S.A. Forbes actually began.    In 1887, in “The Lake as a Microcosm”, Forbes observed that somehow networks of many species evolved to respect each other enough to not make food chains highly unstable, as they would be if their competition had winners.

Maybe the question is better asked as, why doesn’t evolution seem to follow the rules itself, as if somehow the wrong question has been being asked.  It’s always posed as asking how random mutations affect behavior instead.  Maybe it should be asking what it is about behavior that works so well, and so often by not quite following the rules we see.

Maybe it’s a little like a management scientist asking how employees manage to succeed when, looked at closely, it’s found that the instruction “get to work” contains no information on what to do… something about their behavior is doing much more than following the rules.

When looked at closely, rules like “get to work” and all other behavioral rules too, have “mismatched variety” with the successful behaviors supposedly “ruled by them”.   Some other agency such as the employee’s obvious need to “learn on the job” is required.  Otherwise behavioral rules would have no way to apply.

If you ask the question that way, and look around, the answer is among the most obvious things about animal behavior generally, every kind of living thing is actively learning on the job too!   So that changes the question to asking what kind of “learning on the job” might result in species evolving a “live and let live philosophy”, or other kinds of “altruism”?

Maybe what successful mutations do is not give us new rules to follow but new talents for learning about our complex situations.  Maybe the “instincts” we recognize in behavior are there to give animals curiosity about particular situations, rather than to impose rules on their supposedly chaotic guesswork.

It’s sounds silly, but, could it be that maybe animals are animate?

To me it looks as if our scientists are often caught up in mistaking the rules they develop as patterns in their observations, and for predicting behaviors, with the behaviors causing them.   It’s basically very puzzling why we’d be confused by that, but we seem to often be.

For centuries it seems we’ve been describing such a lively thing as the ecology of life, that we’re also a lively part of, as following a handful of lifeless rules.   It’s as if we’ve only been interested in the rather small parts of nature our rules seemed to let us control.