How’s this, for cracking “the mind wall”…??
(the supreme arrogance of treating knowledge as reality)

I’ve been showing people interesting ways to make use the difference between our mental and physical worlds for many years.   Here’s another.   If it hits an important principle, or suggests any way you might use it, I’d be glad to know and to see if I can adjust my language to fit your idea.

The natural end of “low hanging fruit” is “falling off the ladder”, a universal trap at the natural limits of reach, where rising risks meet declining energy to respond to them (if your plan is to keep climbing).

Intellectuals in particular, have had difficulty accepting we can be quite certain of finding some things in the unknown, like the dual reality confronted in any observer’s mind, as it finds its world works differently than they think.

Intellectuals commonly fall prey to saying their reality has to be based on their information, for example.   It results in “innocent” puzzles like the unclear meaning of things they don’t have information about, such as “the sound of a tree falling in the woods that no one hears”.

Human knowhow doesn’t exist in a vacuum, though.  It exploits an unknown natural world, and denying the unknown limits of a mind’s ability to control the unknown is a mortal hazard. 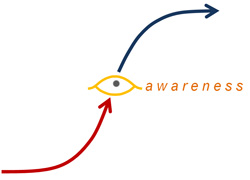 Responding to the limits of reach  in time

Human “knowhow” expands when using and testing information.  It also generally does increase in one’s ability to control one’s unknown environment, with effort.   One needs to be watchful, though, to avoid the certain natural trap at the end.  That’s where at the limits of reach into the unknown one finds increasing costs and decreasing returns, perhaps suddenly becoming insufficient to continue the process.    Denying the need to be watchful, until after falling prey to that trap, keeps you from learning about it in time.

At some point increasing knowhow will produce decreasing returns insufficient to continue the effort, either by 1) losing control for being unable to cover its energy costs or 2) taking control, by choosing to divert profits to something else.