Uroboros is the symbol of a system that consumes itself, either literally or symbolically.  There are many kinds of feedback processes you could liken to a serpent eating its own tail.  The compost from one generation of plants nourishes the next, for example, so the new generation is partly consuming the decay of the last generation, the “tail” of the cycle of growth and decay.

You definitely would not call plants growing in their own compost “self-cannibalistic”.   Consuming ones’ own living parts, however, is quite an apt description of what happens at the natural limits of a growth system that ends its growth only because it exhausts its free resources.   In economies the more competitive parts may then find nothing more interesting left to consume other than their own system’s weaker or less familiar living parts… (discussion contued at end)

The Uroboros mistakes her tail for lunch.

a short children’s picture book project 1) to print out, cut and paste up, fold up or decorate, 2) label each picture with the names of loop stories of your own to go with each picture, 3) retell your loop stories, elaborate on them or add new ones as you read your book at bedtime. © J.L.Henshaw 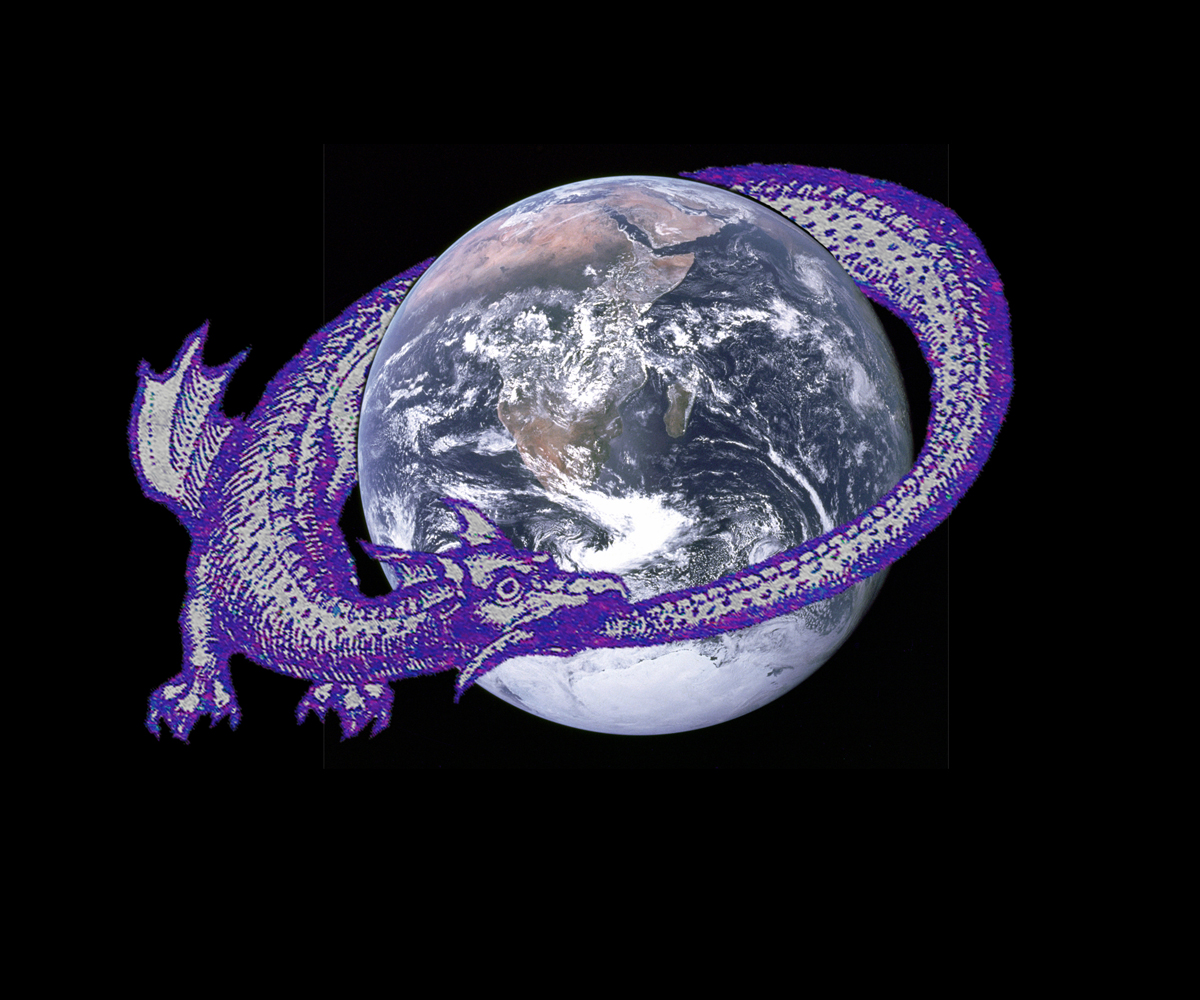 Or she may wrap it around the earth, finding her tail on the other side.

It would just look like a surprisingly tasty treat!

(continued.) That describes how the wealth, markets, technology and industries, etc, of the developed world are being consumed as resources for the growth of the developing world as new form of economy that produces more for less than the established one.   What’s driving that process at rates of acceleration our societies are finding themselves unable to adapt to now is the relentless acceleration of change resulting from maximizing compound investment.

Finance uses its profits to multiply its investments, seeking the highest rate of ever growing profits. Nothing about the financial principles for maximizing profit say investments should serve the life interests of the investor, only their immediate financial returns.  What then naturally happens as a growth system reaches natural limits is its more competitive parts run out of things to consume that are not parts of itself, causing the form of competition in the system from collaboration in controlling outside resources to internal conflict, like becoming self-cannibalistic .

At the limits of growth on earth a growth system naturally finds it ever harder to find things to eat that are not parts of itself, but also quite hard to distinguish what is what.   The parts of the growth system that gird the earth are unlikely to recognize their own tail wrapping the entire planet and meeting them in the face.

The ecologies are suffering that fate, our businesses unable to recognize them as parts of our economy. Our drive for efficiency is like that, stripping social structure and business plans of all the previous resilience and diversity that once allowed them to comfortably adapt to change.