the alternative journal Yes! published “Building a Resilient Economy“, a fairly well informed discussion of alternative economic approaches… except for being just like “business as usual” in one critical regard. 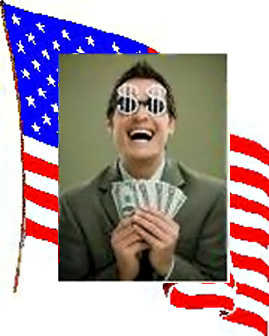 It's that false promise we love too much

Of course the most glaring group of “economic crazies” are the business as usual crowd, but I’ve also looked equally closely at the alternative economics literature. There’s no question but that the alternative schemes are differently crazy, but just as unworkable in a physical world as BAU.

The “goals” are worthy, of course, and there are lots of differences worth discussing. The most exceptional error both broad approaches make is overlooking how people naturally use money.

People use money to accumulate savings, to invest in what seems like sure bets, to endlessly add their sure winnings to what they think are sure bets to endlessly multiply. In nature what that defines is a special kind of casino, one that perpetually loses more and more on every bet, and so is sure to fail.

It’s very odd that both the mainstream and alternative economics communities seem to see nothing wrong with that, as a way to run the earth!! They treat it as a “law of nature” if you believe what’s in their proposals. Even the “no-growth” community, that quite firmly insists on an end to growing use of resources, still holds out for ever growing money, failing to realize that our main use of money is making requests about resource use.

What’s still odder is that JM Keynes wrote the concluding chapter of his economic growth theory (around which the BAU economic growth model is built) discussing the one way to smoothly bring an end to financial growth when the earth starts responding like a casino unable to pay off its ever growing debts….

My recent comment to the Times Magazine may help, on Can Jeremy Grantham Profit From Ecological Mayhem? which was reposed on Dot Earth as Linear Resources + Exponential Demand = ? and as Profiting from mayhem, is that what’s next? here.

« Profiting from mayhem, is that what’s next?
Disaster Hidden by the Weather, a Larger Toll »