Andy Revkin reposted on Dot Earth my comment (below) on Can Jeremy Grantham Profit From Ecological Mayhem? by Carlo Rotella in the NY Times Magazine.   On Dot Earth Andy also inserted other views, posting them together as Linear Resources + Exponential Demand = ?.

The gist is that it does indeed *seem* an economy designed to consume its resources ever faster would end in mayhem.    Except that’s not how nature always does it, making it a choice.   To solve it would change our institutions, but not would be a lot worse.

The mayhem option is there, and as I’ve discussed in an Profiting from Scarcity and Vicious spirals & relief.   From a systems science and sustainable investment view I have an article in the current New European Economy, “A decisive moment for Investing in Sustainability” also with discussed of Jeremy Grantham’s financial world view and research comments and links at big news… from Henshaw, Grantham &… the earth.

Appended are my two responses to the Dot Earth discussion, #12 “science is finding questions for which there are confident answers” and #28 a more modern view of Malthus. 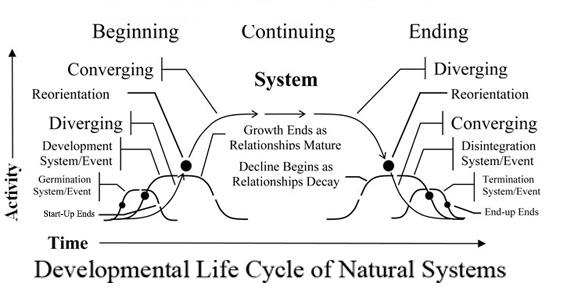 What most people don’t adequately factor in…,

including Grantham, is how classically similar to a “Malthusian crisis” our collision with the resource limits of the earth is.  Our economy is having to adjust to the earth providing linear rates of supply to satisfy our built-in exponentially growing demand.  What’s hidden from view is that nature has two ways to handle that classic crisis of natural limits.

I have a good article on it in the current New European Economy, not from a political perspective, but from what I think is a genuinely enlightened natural science perspective.   At the natural end of growth for emerging natural systems, they have built-in exponential demand meeting an environment providing linear supply.  The response can be either “exhaustion & collapse”, or its “emergence” or “birth” as a new independent self-managing individual.

When growth results in the emergence of a new individual a system switches from multiplying its control of its environment to becoming responsive to it, as a partner.  That’s hard to think about, as evidenced by how often people have raised the subject and had the discussion die.  Still, we still somehow need to become responsive to the earth.

Even J.M. Keynes wrote on it, devoting the concluding chapter of his economic growth theory on the subject, Chapter 16 of The General Theory.  It didn’t get discussed, because our whole business and finance community “didn’t want to go there”.

What it involves in noticing how much more profitable the economy would become by using the natural means, at that point of crisis, to smoothly end rather than destructively continue needing it.  I’ve written on that too… Keynes’ “widow’s cruse”; compulsive capitalism v. natural growth

My comments on the following Dot Earth discussion:

#12 – science is finding questions for which there are confident answers

I guess there’s a delay in approving comments.  I found Andy’s post confusing, presented as a “balanced” scattering of radical opinion, rather than contributions to studying a tough question. For subjects that are confusing to people already I think that just adds to the confusion.

One of the things science demonstrates is that finding good answers depends heavily on what questions you ask. Looked at that way science is not a method of answering the questions given it at all, but a way of finding questions for which there are confident answers.

So, how would I respond to asking if we’re in for a “bad hundred years”? I would offer the more answerable part, asking if our economy will gracefully respond to it’s natural growth limits or not?

The answer to that is clear, that people and the economy are deeply conflicted, and the reason for there being little discussion isn’t because it’s resolved but that we’re confused. There’s little doubt that the resource markets are signaling that resources are becoming scarce and the economies can’t find substitutes .

I think the best starting point, that Keynes used for it too, is that nature presents growth systems with an inescapable choice. How do they stop investing in their own growth before it becomes unprofitable? There are lots of examples of natural growth systems that change to mature at their peak of vitality, as well as ones choosing the default option of growing until they collapse in exhaustion. Ecosystems can do either, and the default option would be far worse than a “bad hundred years”.

That nature would ever present us with a choice like that is astounding, but it opens up the other side of the question. Why not ask if we could respond, like the natural growth systems we admire do, and choose to “mature toward a peak of vitality”, and avoid exhaustion?

Hmm… I’m not sure what the argument of the anti-Malthus group is here. What is it they think was disproved so many times?

In nature it’s not just population growth that transforms its environment to bring an end to population growth. Take our own births as organisms, when we started out as a single cell it was as a source of ever multiplying demand on the linear supplies of nourishment we could scavenge from our mother’s bloodstream. In the womb we multiplied our consumption of our environment by a factor of a trillion, in 9 months (!), before we were kicked out of there, to struggle in a new environment and fend for ourselves.

Malthus didn’t have that way of explaining it, no, and to modern ears how he said it might seem a bit clumsy. That’s clearly the phenomenon in nature he was talking about though, isn’t it. Growth always comes to an end by transforming whatever was growing, so it becomes something else.

The question for us should be about what choices we have for what we become? For exploding consumption of your environment there is no choice to not become something else. That’s one of those well chosen questions science can answer with high confidence.

When you look around at the things in nature we admire the most, their period of growth was important, but just the beginning of something else more important. For growth systems in nature that “make it” past their explosive period of growth, life after growth is what you call “maturity”, a usually much longer period when the new system really creates and lives out its life.

« Does living in social networks change how we think??
The economic “crazies” all around »