I say it in that ironic way to emphasize the changing role of putting money into the economy to take more out.   It does make the economy grow stronger at first.   Standing outside the struggle of its creative struggle, letting your idle money milk it for more money, first has a stimulus effect on growth, but in real terms is always being being a leech on the system too.

While the system is discovering ever more opportunity to expand the more it expands, then “being a leech” at first does indeed make it bigger and stronger.   That corresponded to the period roughly from 1600 to 1950.

From then on it has successively weakened and foreshortened the future for economic system as a whole.    It’s the continuing use of money to demand ever growing earnings from one’s idle savings from the past, past the point in time when it starts accelerating the depletion of economic resources and opportunity, is the

of magic productivity that being a financial leech begins with. 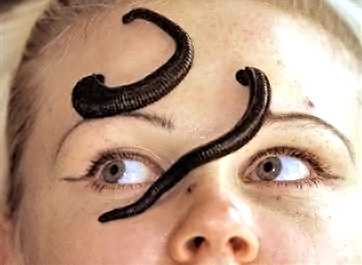 If you treat your information as reality you can get the entirely wrong idea, as it seems that accelerating the consumption of depleting resources is highly profitable…  It’s really not.   You need other kinds of measures to discover the what level of profitability is sustainable, starting from the complete certainty that ever growing profits from anything is a false idea.

the leeches actually did make us stronger!

…and now that the environment has reversed its response to it, we’re not ready or really even aware of the need to change our habits.   We are even still promoting the methods of using our profit from consuming the earth to multiply our consumption of the earth, as our main cultural entertainment, and spreading that around the world for all to join in on as a permanent lifestyle.   It’s madness, for nice people to define their world of entertainments that way, pure disassociation between mind and reality.

Who are the leaches, the people who need to change their ways for our productive life support system to survive?   Well, it’s very precisely all of us who have some surplus earnings that are managed to accumulate ever more unearned income.

The cruel irony can also be our freeing insight, though, to see that the heart of the problem is as much with the retirement savings of the American middle class, as anything else.   It’s the way their own savings are being managed that is the clear culprit, driving the destruction of the cultures, lifestyles and communities of the American and European middle class.

More generally it’s any and every institution designed to rely on leveraging savings to multiply investment earnings.    A promise too good to be true like that…  a “guaranteed ever growing free lunch” no less, is a clear sign of dangerous magical thinking.    It relies on bleeding the productive economy and the earth at exponential rates forever… and becomes decidedly unprofitable.

but going too far they are now draining us dry

It’s not the physical world that stopped working, but our concept of endlessly living ever more richly.    We’ve become the leach bleeding our own world dry,

believing that is the way to invigorate it.

It’s not.  The physical world changed direction, and we need to acknowledge that and learn to follow.