That’s something of a trick question, actually, as throughout history the natural world has had a “made up” appearance, and people have struggled a lot with establishing whether any perception they have is “real” or not.

People have created a great variety of ways to say that nature is a projection from “the mind of God“, in one way or another, for example.   Modern science represents nature as a projection from the “invariant laws” that evolved from a starting point in “the big bang” beyond our view.  That’s almost as unsatisfying as the religious view, though.

Lots of people have noticed how very strongly people influence their own perception of reality, resulting in our own views at least being largely just a “human mirage” created by each observer.    The philosopher/scientist, Gottfried Liebniz pictured a complex image of nature as composed of self-defining worlds that are whole and imutable unto themselves, sometimes pictured as mirror balls, that he called “windowless monads“. 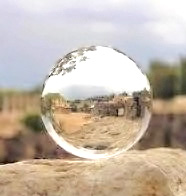 Another approach combines parts of all the others, by allowing each to have some variety of its own “built in mistakes“.   Most of what our minds are able to conceive of nature is rather imperfect, including our belief in “idealized realities“.   They could be as full of mistakes in our own thinking about them as any other, and overlook the complexities of the real natural world and reflect just going overboard in simplifying things.

A “combined view” would retain the perception of the views of individuals being naturally subjective, somewhat like mirror balls of perception which reflect their “own system’s internal logic“.   What a camera sees is always colored by its own lens.   From that starting point a learning process would let them discover some of the important gaps in the initial natural view of reality our minds create for us.

Much the same applies to mathematical models.  Once you have the view of reality a model represents, reflecting the question asked that generated it, then you can “peer into the matrix” of how nature’s far more complex and changing other ways of doing things affect it.

Liebniz’ view is quite difficult to follow in the original, but seems to be an important stepping off point for the ecological and holistic views of nature.  It’s quite observable that a great many of nature’s working parts are self-organized in whole units.   Organisms, cultures and businesses all integrate their parts and create relationships between them to compose individual working units, and so create the contexts natural “complex systems” we see in ecologies and economies.

If observed from the view of any one such self-organized working unit, then, the rest of the universe is its own special place in its local environment, and is naturally a kind of complementary mirror image of itself.   So its universe naturally appears defined in relation to the individual, and creates a barrier for that individual having any other view.

To digress a bit, one of the most telling and strangely ingenious “standard working parts” of natural systems is the way they communicate across gaps.  The products of one part of a natural system are often just abandoned by what creates them to be found by others in the open environment, through which there is no fixed connection.   Resource exchange between cells in our bodies is like that, floated from one place to another like “messages in a bottle“.   So also are the signals between nerve cells exchanged through the very small but quite open gaps at the several kinds of synapses in the brain.

This same feature of using “connecting gaps” between working parts is very odd to a human point of view, seeming to let every part of a natural system be independent, rather than controlled.   It’s clearly one of the things that nature has experimented with extensively, though, and as she does it works splendidly.

She regularly makes use of open environments for exchanging critical information and products between parts of well organized systems, just like the way economic markets organize economies.   Producers just abandon their products and consumers then sort through an environment of options for what to buy.  Neither need know what the other was thinking for it to become a very productive and reliable relationship.

You also see the same open connections in what binds people together in their deep relationships.   Our communications consist only of unattached packets of information, like these words on the screen or page.  Human communication, even personal touch, is essentially sent through the environment, unsure what will be received or returned, to be selectively reinterpreted by the receiver independently.   So we may need to keep asking “Did you get the message??”, and find it somewhat hard to tell.

So, nature is somehow orchestrating all of this kind of exceedingly complex organization, apparently using quite unguided feedback as one of the main links.  It’s both rather awesome, and good evidence of why people need to make up their own simpler versions.

Glimpses of nature’s greater complexity can be used in creating the combined view, and help one appreciate how their subjective views fit into the larger complex reality.   For me it’s largely a matter of finding delight in discovering how to see through gaps in my own images to get new material from outside my own point of view.

One reliable and important gap in our perceptions we can look through to find new things is found in how nature’s working parts work by themselves, as units.   Most of nature’s working parts are organized in whole systems, collections of complementary parts that work together, using their own internal organization.

That’s like how the bodies of organisms are complete in their own internal design, with a distinct outer skin as a boundary, to mediate their independent use of their environment.   It’s also how cultures or different businesses exist with their own internal languages and discussions, that outsiders naturally “not in the loop” can’t appreciate.

This great “isolation of interior worlds“, that from the outside you can’t see what’s going on within things organized from the inside, is also apparent in the event of getting pregnant.   First, you can’t see what’s happening at all and don’t find out that anything is happening till a great deal has already, and then never quite know what the product will be.

So that central event of our lives, that preoccupies so much of our thinking and cares, is done to set off what from the most reliable evidence, a largely uncontrolled process.   A child needs to learn self-control on their own, and largely as a result of their own experience, and even that is clearly not predetermined either.

The emergence of any growth process in nature generally duplicates those basic features of pregnancy.   Growth in nature is a kind of pregnancy of the environment in which it occurs, creating uncontrolled construction process, starting hidden from all outside views.

As it develops outside viewers are unable to see inside the complex organization in development.   Both the emerging system and its environment need to become responsive to each other, by “passing messages in a bottle” as the mode of blind communication, in forming their new relationships.   It’s definitely not how people think of organizing things, but works marvelously for the things we rely on that organize themselves.

To peek into those worlds I use the tell-tale-sign of a “quickening pace of events“, interpreted as “nature becoming pregnant” right before my eyes.  It’s a hint to where in my environment of things I’m familiar with something quite new is on the way.  It’s an opportunity to respond to it by my inventing little narratives for myself, about what it might be.   So that’s where I find the natural world, located in its eventfulness, and how that keeps enriching the stories I tell myself.