Originally “Where I’ve gotten so far”, A somewhat better summary of my work that Rex Weyler found helpful started from a discussion titled “Are Stock Markets Ponzi Schemes or Real Wealth?”. Rex wrote back: “This and the SEA presentation on your site are helpful. Thanks.”

To me and I think to most economists “the stock market” is not seen as directing the economy, just in the news.

In reality it’s a game of mutual pick-pocket
played by the rich, that helps banks measure the credit worthiness of businesses

I added a line for US GDP to the nice graph of US Quads of energy use & Dow Jones prices done by Charlie Hall (1).   It’s remarkable.

It seems to expose a bit of a “fraud” in what people have been told of the role of the stock market. Clearly both GDP and energy use have generally followed smoothly progressive curves.  Clearly the Dow doesn’t track or lead either.

There’s a lot more to why US energy use stopped growing and GDP kept growing, but the DOW really seems to be just sailing off on its own.  It reflects no aspect of either of the consistent indicators of economic wealth.
(1)

“Phil .. Thank you. Your (and Charlie Hall’s) graph provides a useful contribution to this discussion. These relationships help explain the limits to “real” economic growth, biophysical limits, energy throughput, thermodynamics, and so forth. Your addition of the GDP shows the gap between economic activity and real wealth. (As Daly points out, GDP conflates costs and benefits)…. plus a few more paragraphs”

Your post is difficult to respond to, though I surely agree that physics applies. I think I’m working on how to connect physics and economics, with my Systems Energy Assessmentmethod.

The world(s) of physical economics are still highly fragmented and not in agreement on including natural systems, though not considering how our economy emulates natural economies seems hard to avoid conceptually.

There’s a secret to why US GDP continued to grow exponentially (till 2008) while energy use started to level off in the 1960’s. The world GDP & energy use curves (at the left) don’t show that at all.

For the world, the relative growth rates of GDP, energy, and the ratio of GDP to energy (called Economic Efficiency), are constant over the last 40 years. So something else must be going on to explain why US energy use has not been growing. 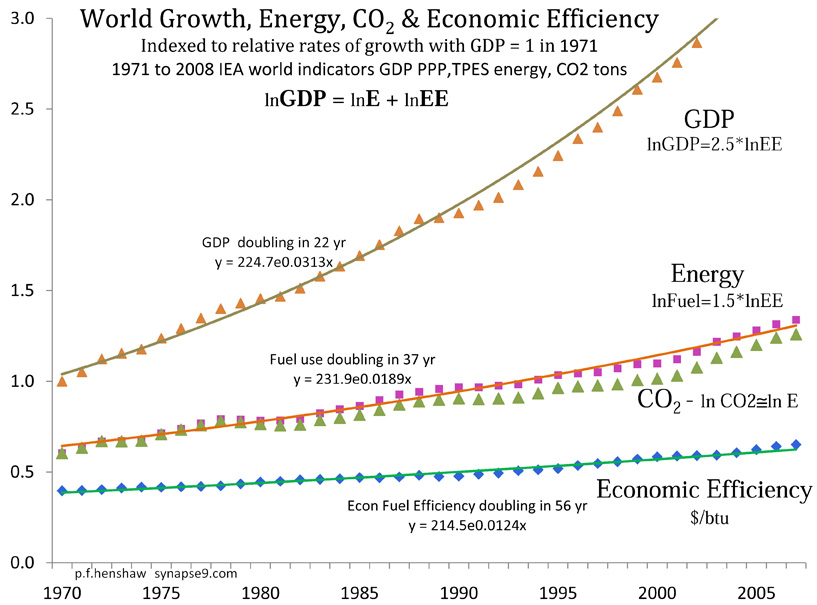 The problem with understanding it all starts with nature being so full of things that behave by themselves. Natural systems are cells of organization for using energy, that independently organize themselves as they grow from the inside.

Physics doesn’t accept that model of nature, so it’s not taught in school. It makes us quite handicapped for studying them, as the internal organization of cellular systems is generally invisible to outside observers too.

The best starting point seems to be to mentally connect the natural succession of growth with the cells of organization that develop by growth. For growth to work, growth systems have both a “working process” and a “seeding process” to pump up more, like population growth works. That seeding process is what changes at the limits, or the whole process fails.

I’m showing the economy as the bubble called “people” in figure 3, and the exchange of products and money from person to person through markets, “money market” and a “consumer market”, just to keep it simple. How the economy grows is by finance acting a bit like a farmer who plants more than he needs so he can plant more each year.

That grows to exhaust its resource, of course. The solution that Keynes identified, is for finance to stop planting the extra seed, as not doing would end by making the whole economy unprofitable and like an overplanted field, limited die off’s instead

Communicating that turns out to be difficult, for the above reasons, as well as that people often think having their own opinion is equivalent having well grounded insight into how the complex natural world works, which it not correct. That’s as good a condensation of what I think I’ve found out on the subject myself, anyway.

If you want to look further into my approach you might just browse my site, or start from “Why finance has a bigger appetite than the earth” and follow links to the various discussions. 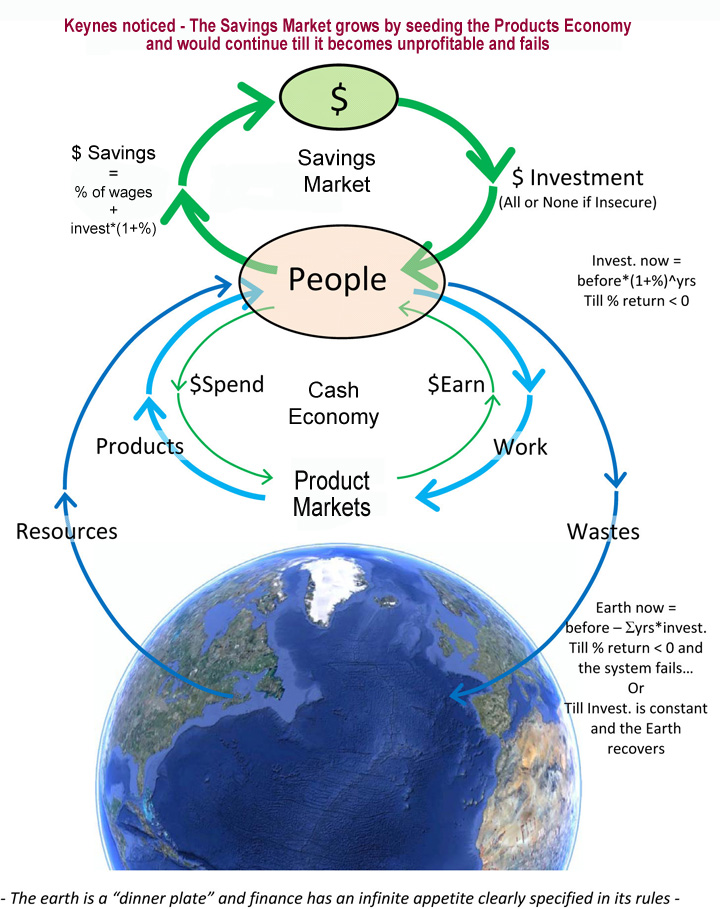