Brian Lehrer on WNYC radio asked that question “What happens after the revolution?” to discuss the experience of people that might apply to the amazing events in Egypt and the Arab world, and what follows.

I’m a scientist who studies the revolutions in natural systems that nature uses to create everything.  You discover causes later, and discover revolutions happening from the explosion of new relationships emerging.

Generally there is a kind of “calm before a storm” that becomes a “viral event” which then goes through a succession of stages.   The emerging system seems to “graduate” from one level of organization to another as much as people move through a succession of graduations in life, experiencing a “disrupting and remaking” its environmental relations.

The Egyptian revolution today is at the stage of  “immature new culture” needing to mature to find what to refine as their new national culture.  A similar challenge faced followed the dramatic collapse of the Soviet Union, now seemingly approaching the end of its second experiment with self-government.

There are better new tools for studying these events and histories, as seen in my study of  “silent” collapse of the Crack Culture in NYC from 1990-95.  You need some mathematical analysis to make sure you have quality data, but mainly just learn to observe how an environment is changing by the presence viral cultural or ecological events.

Any viral event you see is likely some new form of culture breaking from its constraints.  Studying the ones involving your own life gives you a real appreciation for how new cultures can emerge with an environment of relationships changing all at once. There are as many kinds of emergence as there are of ways for new forms of culture to emerge.

—
Once new forms of culture emerge from their initial constraints the important things are to 1) try to grasp what the common elements essential to it are, to establish its sense of identity and 2) then be active in learning how to integrate with its environment by being openly exploratory, inquisitive and patient.

Never losing sight of the principles not yet stated, but that permeate the new culture is valuable. Because the reality is different from the perception, it’s important for perception to remain as open to and observant of the reality to not result in being confused as to what the new form is.

For a “new born” culture that has just burst onto the scene, the first experience is being “helpless”. It really doesn’t know anything at all, like a fragile seedling, or nubie in any field, or your first day on a new job or school. Changes of form all come with that kind of “first day experience” of graduating to a new world and feeling completely lost in it at first, because new systems that have just emerged haven’t discovered their connections yet. 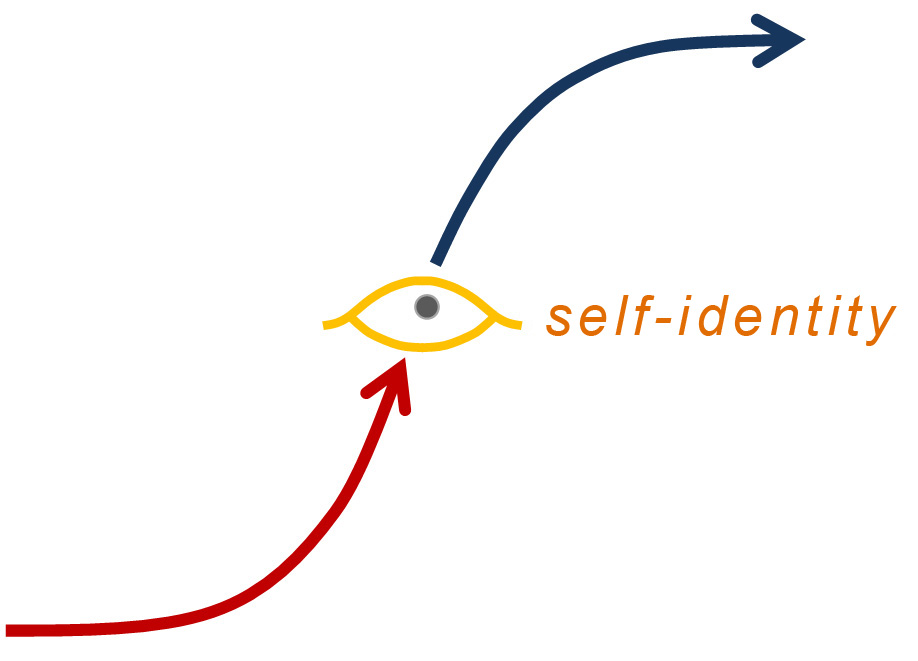 …for example, they look more lost than any kind of living thing you’ve ever seen…! You normally think of ants as seeming to really know what they’re doing, but as newbies the difference is remarkably clear.

Every new start then, benefits from not rushing that, because it is a learning process and not a program, and from nourishing the learning process in exploratory ways, to keep your identity and find the complementary roles that will knit things together.

In the diagram the “point of awareness” is when a viral process of an emerging culture has reached the stage of coalescing on a self-identity (not an “awareness” except for thought processes, of course) and begun the process of maturing and integrating with its environment.

Have a clear practical vision to organize around.

One of the key insights mentioned on-air today was the importance of the practical steps of people hammering out the details of the new institutions, somewhat out of sight. That builds the actual strength of a society. What the public, and the press, ever really see of that building process is the “believable vision” of the architects giving it a recognizable face.

I think the reason for the feeling that Egypt could be in trouble now, is the absence of that kind of concrete vision for the practical constructive efforts behind the scene, on all sides, to coalesce around. Today, one side says “change” and the other “go slow”.

Neither is meaningful enough to show both how they can stay out of trouble and begin to work together. So, what’s the practical vision, of the “new day” for Egypt.

I was thinking about how Egypt’s civil authority does need time to develop and its need for “safety wheels”, of some kind, as it does. One main danger seems to be ending with a democracy in name that is just another puppet of authoritarian rule.

Maybe the vision all the world would understand and could work is the military needing to accept the obligation of taking the immature civil authority on as a protectorate, a relationship that would have its frictions, of course, but ending in a free civil society as it’s unequivocal goal, just some loose strings attached for a while.