I’ve been discussing since the 70’d how and why growth creates growing complexity and so growing difficulty of problem solving, as a natural physical limit of growth for systems with physical working parts of any kind.  A a discussion of the signs to look)  It’s both a real concern as a threat to the health of an economic growth system, and good proof that the natural world functions very differently than a conceptual model.  It led to my proposing a whole new set of scientific methods for how science can study natural systems in their own form, as forms of natural organization not concepts.

1970 marked the sudden end of steadily growing  US wages, and the start of ever growing wealth inequity. “Information overload” as a threat to societal resilience was becoming a key topic of discussion as computers emerged as our premiere business tools

Was that how the economy changed behavior, as humans began to be replaced by technology as things got too complex?

Below this discussion of the general problem is the blog comment from 9/3/2012 observing the strangely logical connection of the emergence of computers as a (false) solution for the ever more numbing complexity of our lives.

A follow-up Sept 7 2012 post Computers taking over our jobs and our pay? explores a fairly reasonable cause for the systemic decline in demand for the products people produce, that the computers making them don’t buy them…

Here’s a graph of the use of the word “complex“, as found in books scanned by Google. It seems to show a distinct end to the long historic growth of interest in complexity, apparently in pace with the increasing complexity of the economy.   The complexity of all our life issues, as well as demands of education, etc. have similarly increased with the growth of the economy, but only up to ~1963.

Google’s Ngram tool shows steady exponential growth in the use “complex” beginning in ~1840 and continuing to ~1963, where there’s a distinct growth “inflection point” (curvature reversal) in the trend.  The clear end of increasing use of the word is a little mysterious.

The 1960’s, of course, coincided with the actual time when the complexity of the economy’s environmental conflicts, the emergence of computer use, and the rise of true globalization were noticeably exploding the complexity of things…  That is also directly implied by the continuing explosive growth in real GDP, as shown in the combined graph below.

That divergence between the two trends would seem to imply that a very large gap, between the real complexity of our experience and our cultural awareness of it, began for some reason to grow faster and faster at that time.  It seems to have starting in the early 1960’s and to continue!

Is that really “the mark” of information overload?

The combined data implies a subculture developed increasingly intense awareness of what was going on, as the rest of the culture stopped being able to focus on it.

Or is that a “coincidence”?  I think it’s clearly at least a natural phenomenon, that seems clearly to be going quite unnoticed.

What it looks like to me is clean evidence of what many of us have been groping for good words to describe, having to do with complexity becoming overwhelming.  Did our culture actually lose interest in complex issues, just as complexity science was emerging too, making the subject “boring”?

Or… was it “the point at which “The System” blew our minds??

What occurs to me is that growing up in a world that was supposed to make sense, but finding a society that had lost track of what was happening, was the heart of the 60’s generation’s complaint, and its demand for action!

The Google Ngram for “information overload” (brown line) and for “bottom line” (pink line) show coincident emergence with break in the long historical trend of use of the word “complex” growing in pace with the complexity of our economy.   That indicates to me that the discussions reflected by Google’s “survey of books in English” stopped being able to keep up with the continuing rapidly growing  complexity of the world we live in, though why is open to discussion.  The more consequential concurrent departure from the GDP trend, of course, is the leveling off of constant dollar US median income figures, suggesting a connection between the relative declining interest and ability to cope with complexity caused employment to have relative declining value to the economy.  (click to link to image) 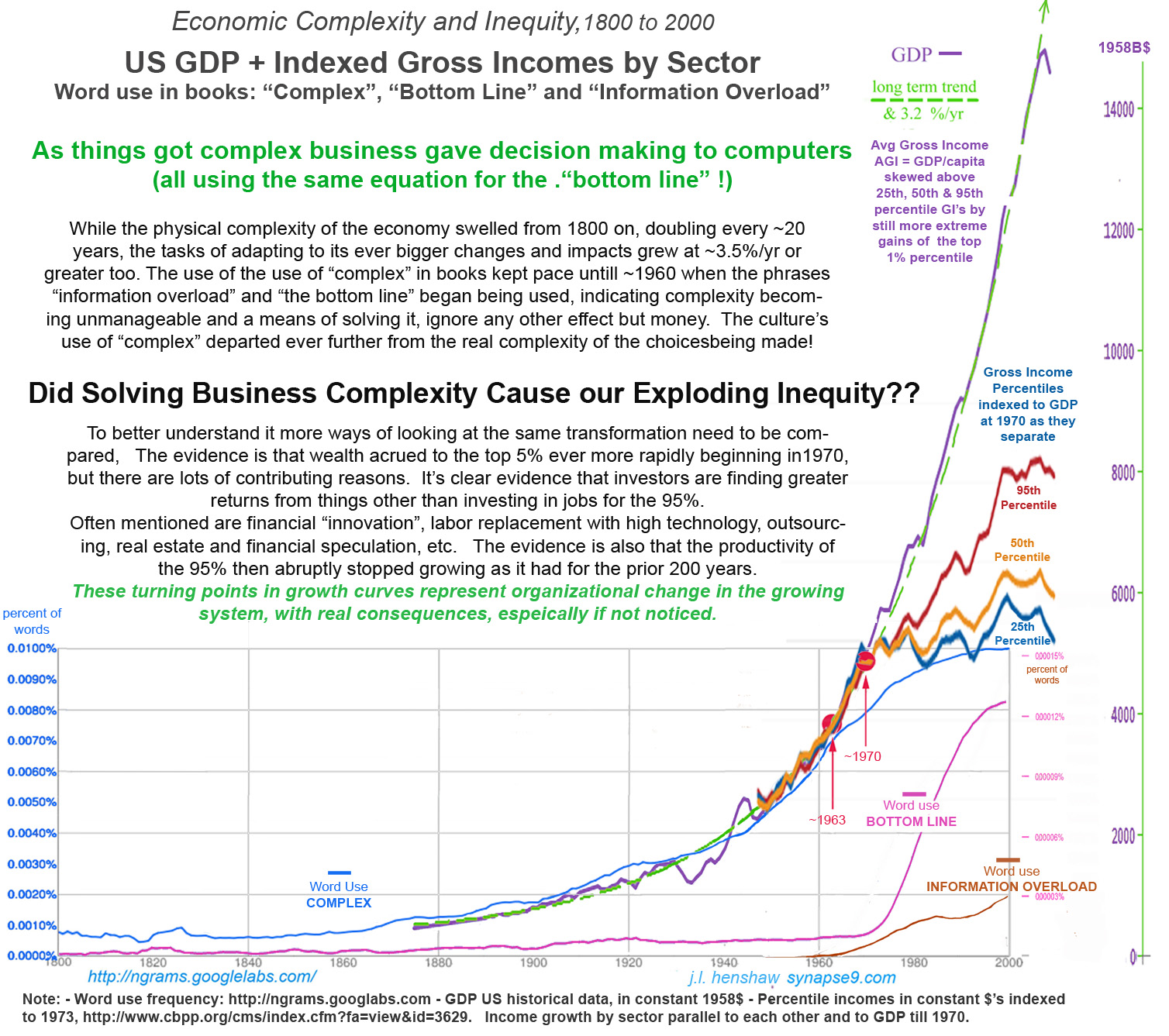 The whole 60’s movement could be summarized as “Hey, pay attention”. It then, of course, promptly failed the test too. I definitely noticed a “big chill” in curiosity for the complex problems a few of us were making good progress on in the late 70’s. TheGoggle Ngram for “big chill” shows it’s use emerging in ~1980 and still a very live concern.

No one’s cultural heritage would prepare them for this kind of whole system departure from from reality… right? I think it’s still very important for people to know that complexity is more than a problem, it’s a “nerve poison” too, as the natural process of multiplying change and increasingly complex and conflicting interactions at the limits, naturally deadens our decision making ability. The same turning point, when increasing attention by bigger steps shifts to increase by smaller steps, turns up in the Google Ngram for “complex, complexity”, but with the latter not completely leveling off yet.

That, it seems, that the difficulty of managing an ever more complex world economic system, with ever more confused people, didn’t come up in the planning for our modern world, is very curious. It seems managers and thinkers assumed they’d always come up with the formula for how to run things they didn’t have the formulas for, as they had always seemed to before.

That’s deeply confused thinking, inherently, that taking ever greater risks won’t ever lead to failure because it didn’t before… At root I think it’s a failure to notice that organization is a byproduct of independent parts finding how to work together, and not a formula or image someone betting on it imposes on the parts from afar. Our thinkers seem to not have been thinking about the world as having parts needing to find their own way of working, but instead thinking about themselves as virtual rulers of it.

Peter Brown, the Canadian economist and thinker, [see The Moral Economy Project] also talks about how the complexity of modern life has become numbing, how we’re “drowning in our worries” and experiencing “idea fatigue”. It’s one of those “little voices”, a sick feeling in our gut that we might listen closely to and not be confused by.

It’s not entirely different for a whole society experiencing that, dreading the approach of nature’s final exams and feeling at loose ends on the subject matter, and a school child approaching the hour of starting their homework every night… In each case, it’s worth noticing.

The physical complexity, corresponding to real GDP, was not leveling off…

I submitted the following two comments on a related  Business Insider article by Charles Smith “The Future Of Work In America” (9/3/2012) suggesting “Technology and the Web are destroying far more jobs than they create.”  The comment (1) did not appear

I think the question is quite relevant, and in line with Nobel laureate Wassily Leontief’s 1983 warning that humans will go the way of the horse in the business of providing goods and services. What most people don’t know is that started dramatically in ~1970,

Was it also the advent of Computers… ???
& humans as predicted being replaced by technology?

It’s remarkably clear in the data, quite indelible as a “coincidence” between introducing computers for business use in ~1970 and the “the great divergence” of breaking American society apart with lagging earnings from employment and multiplying earnings from wealth. What was the impetus for it??? Well, of course it was the numbing increase in the complexity of everything.

Computers became the easy way to sidestep the cumbersome nuisance of people needing to think about what they were doing in order to keep multiplying their tasks. That “extension” of our bodies with a new tool had a range of different effects unlike any other ever before.

That computers and their rules would later also run into EXACTLY the same problem, in our finding it not possible to update computers with new rules as fast as they were changing our world, is also very evident here. That’s a spot on match for what I predicted in 79, actually, as the ultimate certain limit of growth. The ultimate limit of growth is confusion, caused by the parts of the growing system needing to make ever more complex and complexly changing responses, ever faster.

Signs of something taking over…

Google Ngram for Computer, Software, Code and Technology
– the “killer app” words of our time –

Well, debate points aside, there’s more to the macro-economic change than mentioned here.   There’s clearly a major technology take-over of production and information services, so the “agents” of the economy with the appetites for consuming said services are increasingly not being paid enough to consume them.

So… if it’s technology that’s producing the wealth, and not labor, what do you do to keep the economy afloat??   Technology has no need for the products it creates.   In a tech dominant world the earnings of the technology go to investors, as profits, not to the technology for consuming the services.  As an a whole system “the circle won’t be closed” unless investors spend enough of their earnings hiring humans, so they can exercise their appetites in consuming the products.   Investors… of course, live by the opposite principle, compound accumulation.

I think this actually clarifies a heck of a lot, solving the riddle of humans appearing likely to go the way of the horse.  That’s impossible, as technology has no desire for its own products.    It also solves the riddle of Chapter 16 in The General Theory, where Keynes points to this same impasse, in another way.   That to work as a system requires investors to be the spenders of last resort to relieve flagging demand, to hire people and not just multiply their money when needed.

If there’s one thing an economy can’t do without
it’s the appetites that drive it, and technology doesn’t have any.

More data and discussion of the structural problem and natural limits of technology take-over on Signals: Complexity too great to follow what’s happening…??