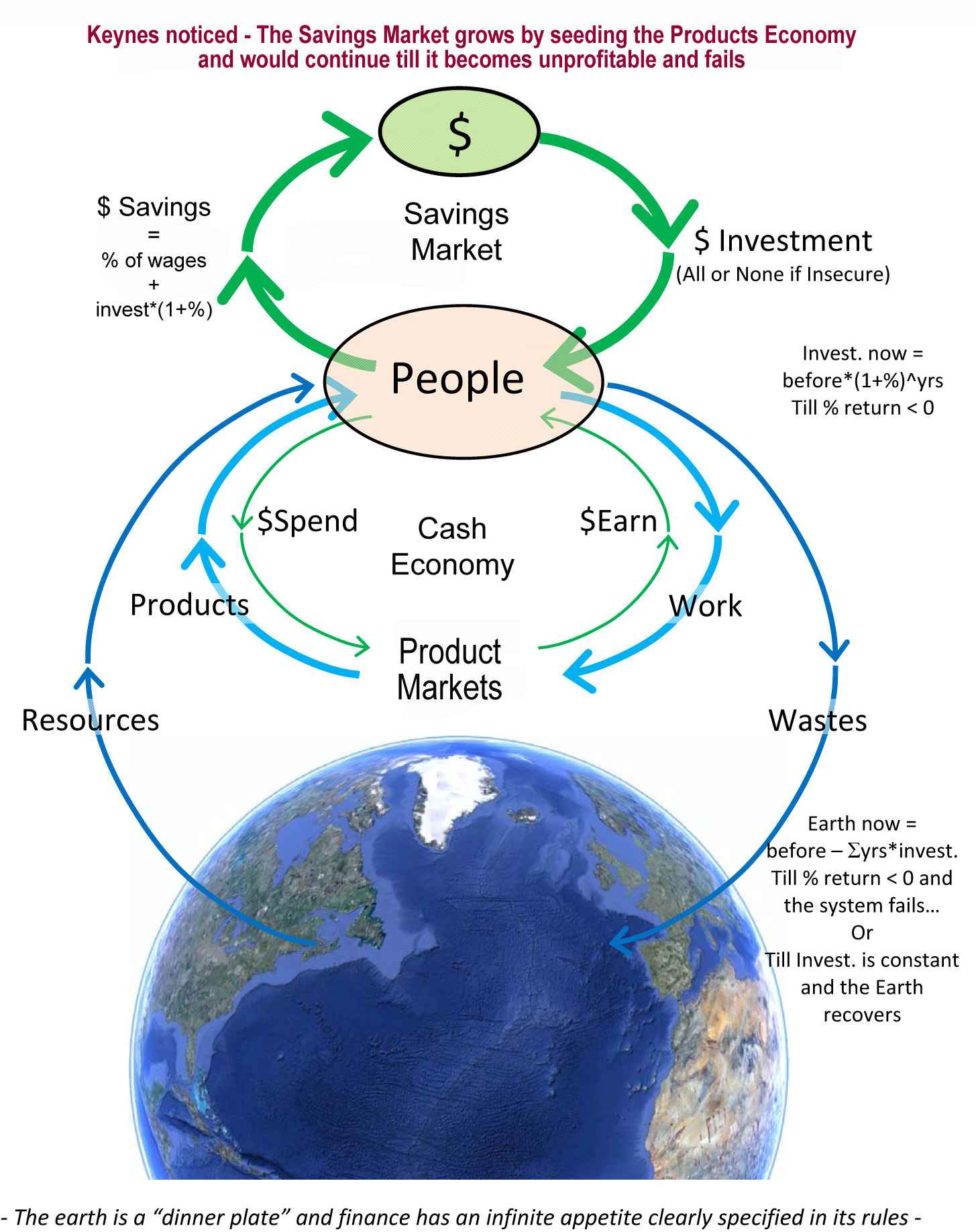 The whole general story of how the economy works now, and how it needs to.

Finance starts with someone’s savings, and “makes” money by money managers giving some to other people with the understanding they will give more back. The borrower is left to find a way to use the earth to make more back from it, by any practical means available to them.

Money managers are quite careful to invest only with a good promise of returns, part of which will be added to their own and their client’s savings, what allows finance to increase by %’s over time (i.e. by bigger and bigger steps). It causes a dollar saved in the past to be owed ever growing returns in the future for the passive service of the permission to use it, for as long as the economy produces any net returns.

The “deal” between financier and borrower doesn’t begin with assurances of making the world a better place as primary, nor even with finding a sustainable way to take good profits from the work of others. The “deal” begins with assuring a financial profit of sufficient size, and only then seeks to assure the growing immediate negative impacts of doing so are somewhat smaller than the growing profits. That’s the OECD definition of “sustainability” developed from the the Brundtland Commission statement, having profits growing faster than impacts.

It’s that “deal” that is the problem, for what it omits. It does not acknowledge the reality that the added money being taken in return, the profits, comes from the creative self-organization of the working systems of the economy, that neither the financiers nor the borrowers understand or control, but only have a role in giving opportunity to.

The profits, physically, reflect the value of that share of the natural capital generated by the system of the whole, a value greater than needed by the parts created by their learning how to work together on their own. The financiers, in particular, having virtually no role in or even awareness of how that happens.

As financiers claim the value of those shares of natural capital as their own private property it gives them ever growing control over the systems producing it, typically choosing for the extraction of natural capital that way be managed to multiply forever. That leaves the financiers making ever greater decisions about the interests of others of which they are completely unaware.

There’s a simple ‘fix’, in terms of the rules of the system. That is to apply the financiers’ natural fiduciary duty when making decisions for others, in this case for the uncontrolled systems creating the profits by the creativity of their cooperating parts.

As the profits directly represent a share of the natural capital of self-organization for the whole community, its interests require the greatest respect and care rather than the least in the use of investment returns. At present, common practice is to not recognize the self-organization of cooperating parts that produces the profit as having any role in producing it.

That’s what gets systems of relatively uncontrolled parts to go beyond their collective end of growth to move toward a state of vigorous good health and peak of vitality as they mature. It eliminates the endless selfish growth of the parts when the surpluses generated are needed for something else. Otherwise growth would only end in leading the whole to a peak of exhaustion.

If members of a work group or community are taking needless risks that threaten the group or community, their friends, good friends anyway, let them know so they can continue being part of the group. It’s the same in an organism with an immune system that responds to internal breakdowns or external threats, calling on some of the accumulated reserves to protect the whole by responding.

To the degree they would want the same advice in return, honest people tell their friends who need help understanding their choices how they might make better ones. When everyone does that it’s the real freedoms that being part of a system of complementary parts that get exposed, more than the constraints.

1) I describe the essential relationships as observations, condensed from many years of research on the topic, following my early 1979, 1983 and subsequent papers on the subject. It is not meant to rule out anyone’s interpretation of how I’m using the words and maybe skimming over or missing important related issues.