Robin Smith posted Where Are My Wages Going on his blog and What Exactly is the Wealth Divide on the Finance Lab. He offers the following simple image and statement, worth considering and questioning.

He says: There is no mystery as to the root cause of poverty. Both the Private State and the Welfare State are robbing us. And giving it all away to landowners and banks. 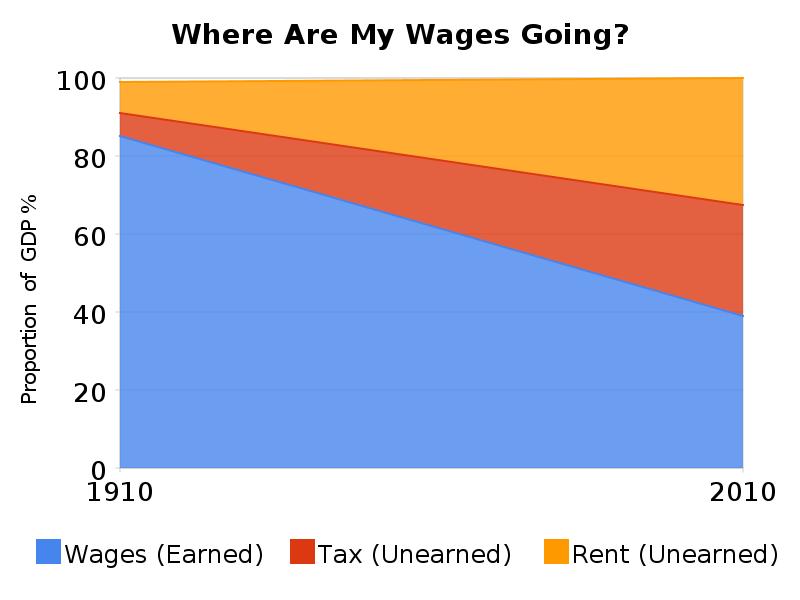 I’d be interested in what else you’ve done. I think the valid point you’re making is that there is indeed a long term systemic trend of more and more future income being paid to people who saved past income. I’ve made what I think are definitive models of why that arises, and what to do about it since the early 80’s.

That’s when my family friend Ken Boulding pointed out to me how Keynes had found basically the same problem and necessary correction for it I had. I’ve continued working on it and the reasons people find it hard to understand, as very simple as it is, really.

The economy operates in a physical world, that’s the problem. In nature energy accounts always balance, invariably. Our economic accounting practice is for energy use credits to endlessly multiply. So…. the systems people set up for that work only temporarily, but then become distorted and fail because we don’t yet know how to recognize the source and corrections of strain in environmental systems.

The way to balance the system includes having people who earn credit for retaining credit from the past be given permission to use those earnings to further add to their credit only when it doesn’t strain the whole environment. That returns our free market financial economy to a circular accounting model, like nature’s systems. As strains to produce more are kept within levels of comfort, investor earnings are kept high by no longer adding to investment earnings to their credit, and so in total, taking out only as much credit for energy use as they put back in.

That’s it in a nutshell. For my writings on it you might site search [site:www.synapse9.com keynes] which will grab the various things people have shown more interest in.

The core dilemma, and why it’s hard for people to discuss, is that understanding it requires discussing the organization of living systems, and science didn’t develop a language for that yet. Science still tries to represent living systems with equations, i.e. as controlled relations between numerical variables. Economies,and lots of other things, are organizations of actively learning parts, however. Representing them with formulas, as following rules other than their own processes of learning and discovery creates a LOT of misinformation about them… you could say.