I was pointed to Michael Herman’s Open Space World, and his introduction to his Open Space group learning methods. We exchanged a couple emails and it occurred to me there’s a simple way to combine his and my learning process models, his using the four organizational dimensions of purposes, actions, stories & structures and mine as the dimension of natural progress in time.

Thanks, that was a good intro. Might this be a cool way to link our models?? 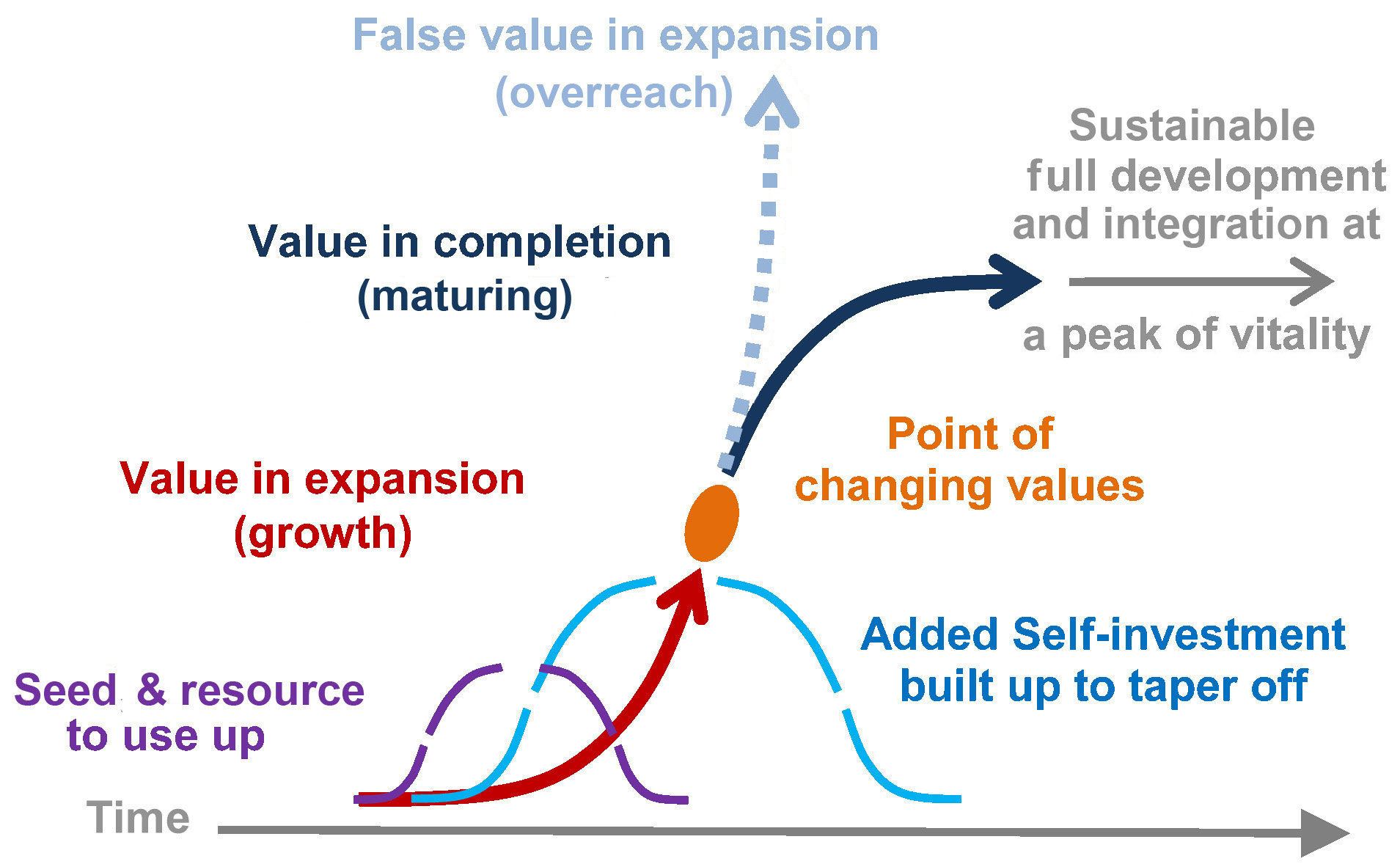 Treating time as a fifth dimension of organization (how your four dimensions ofpurposes, actions, stories & structures add up), and mapped as the sequence ofobservable changes in the form of energy flows that correspond to essential stages of successful eventful learning.

If these two models refer to broad teachable patterns of the same physical reality, they must connect something like this I think.
____

After groping in the dark to find a starting point for your education, learning can expand itself, taking off by leaps and bounds, until changes of scale present unexpected choices of kind. Do you overreach or adapt, presenting a natural point of changing values. The added value of using knowledge to expand knowledge changes to added value in perfecting knowledge, finding a way to integrate with a new environment full of others, all now meeting the same new challenge of finding new values on changing scale.

It’s the same for personal, community or societal affairs, at limits to growth the new task is to simplify and perfect your way of fitting together with others, reducing complications rather than adding to them, being born into a new body, experiencing a change of form and coming together as a whole.

Because it takes time to develop energy systems, and they need “a little push” at changes in direction, these become the basic “evolutionary clicks of time” for organizational learning: germination, development, integration. They’re three quite different forms of productive energy use, and needed in sequence, to create wholes that approach perfection.

That’s not easy to imagine, especially for a creature accustomed to using information as its guide, that set up all its information models, resources and systems without any plan for a “change of values” toward becoming whole. That evolutionary “click” at the peak of one’s power is in part losing interest in the quest for power.

So… some unfamiliar kind of intuition and method is needed, like groping in the dark again, but this time with partners.

For reference, this way of linking the internal organization of a system to how it changes form over time is also the subject of a web page for scientists I did a couple years ago.

With PICS (Projecting Images of Complex Systems) I was suggesting ways to discover elements organization or learning strategies found in one natural system to experiment with in others.