How evolution seems to have alternated in majestic cycles in developing the oxygen atmosphere is indeed a wonderful thing to discover.   I expect that theory of how the banded Iron formations in Proterozoic rocks might have been caused will hold up.

To put it in the larger context, the cycles you speak of from 1.8 to 2.5 billion years ago preceded the history of complex animal life that began with the Cambrian explosion ~550 million years ago.     Below is a chart from a full professional study (in Paleobiology) of ocean biodiversity (not bio-mass) that followed. 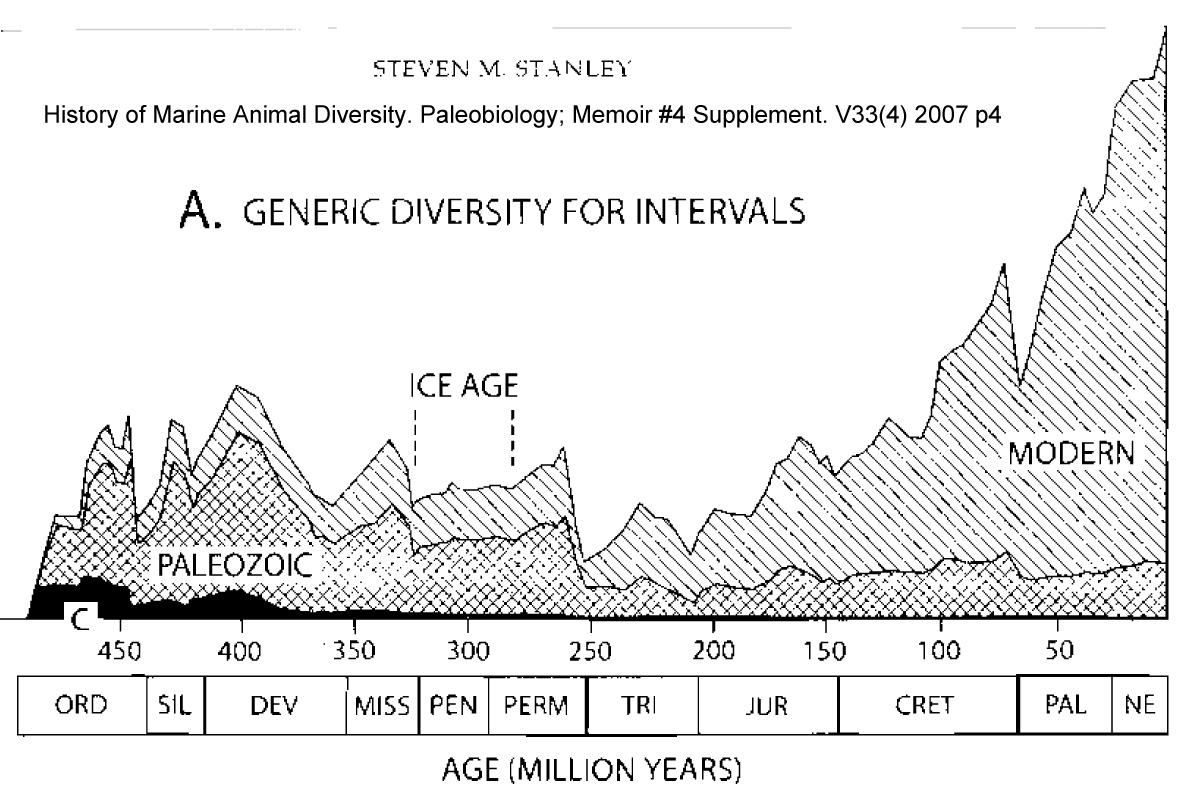 So ‘Gaia’ would seem to be on her 3rd life, ~3.5 Billion yrs of slimes an algae, 250 Million of primitive life and 250 of modern, and being unusually successful with modern life forms still emerging (blooming) in complexity and diversity.    It’s appropriate to think of our place, a life form that has been so successful that it could threaten it all for our not sensing how or when to turn off our own success in exploding the diversity of our success, i.e. …for not knowing our place.

The entire evolution of our own species is about the thickness of the right hand line of the chart!     Is Gaia3 inherently stable, or just another bubble?

Can she and we mature in our new forms, or will we both just multiply to our collapses for not discovering our mature forms and choosing life?     That turn from growth to maturity marks the usual beginning of life, the turning point from becoming to being, and it seems to be a choice not a requirement.

—
Re: Anselmo, The tail is capable of wagging the dog

-> this is possible in agreat variety of situations, (e.g. “butterfly effect”).
-> this is what “GAIA” is all about.
-> example of GAIA and of  ”the tail is capable of wagging the dog”
-> banded iron formations

Banded Iron formations occur in Proterozoic rocks, ranging in age from 1.8 to 2.5 billion years old. They are composed of alternating layers of iron-rich material (commonly magnetite) and silica (chert). Each layer is relatively thin, varying in thickness from a millimeter or so up to several centimeters. Here is one theory as to how they might have formed:

It is theorized that the Earth’s primitive atmosphere had little or no free oxygen. In addition, Proterozoic rocks exposed at the surface had a high level of iron, which was released at the surface upon weathering. Since there wasn’t any oxygen to combine with it at the surface (like happens now in our oxygen-rich atmosphere), the iron entered the ocean as iron ions. At the same time, primitive photosynthetic blue/green algae was beginning to proliferate in the near surface waters. As the algae would produce O2 as a waste product of photosynthesis, the free oxygen would combine with the iron ions to form magnetite (Fe3O4), an iron oxide. This cleansed the algae’s environment. As the biomass expanded beyond the capacity for the available iron to neutralize the waste O2 the oxygen content of the sea water rose to toxic levels. This eventually resulted in large-scale extinction of the algae population, and led to the accumulation of an iron poor layer of silica on the sea floor. As time passed and algae populations re-established themselves, a new iron-rich layer began to accumulate. Unfortunately, the algae were of relatively low intelligence and were unable to learn from their past excesses (this was also before the EPA), so they would again proliferate beyond the capacity of the iron ions to clean up their waste products, and the cycle would repeat. This went on for approximately 800,000,000 years! 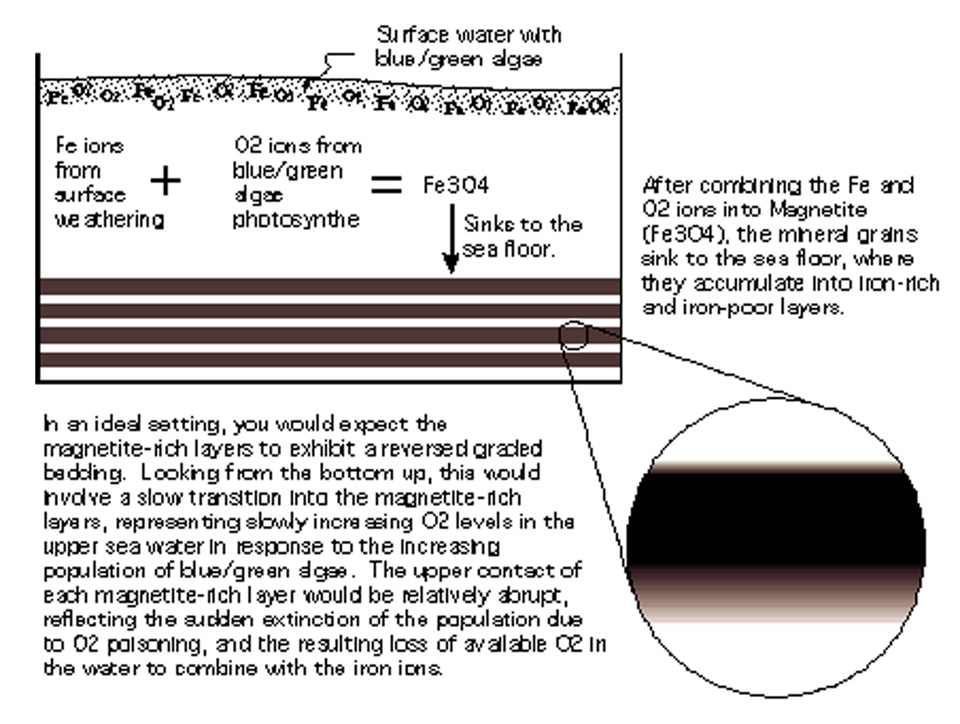