On Aug. 7 this year I posted “A Quick Study” of this same history of murder rates in New York State. The relatively sudden and very final end of the murder crimewave, that started in the 60’s innercity unrest.  Updated research notes on it are at “Crimewave’s end”

It’s a dramatic indicator of an internal cultural change. 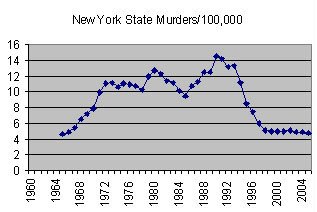 The strong systems indicator in the curve is how it rapidly shifts from high and bumpy to low and dead flat, a clear change of state. There’s really no outside factor yet identified that matches that timing or finality of change, nor explains the more or less sudden relief from a long persistent culture of violence.

In that post I also commented that in the studies I’d read it was odd that no one seems to have asked the people involved what they thought happened. There probably are some scientists who have done so, but I decided to go ask the question on the streets of NYC myself, and see what I got. It’s good reading.(http://www.synapse9.com/cw/cw_interview_notes_10-22_audio.pdf)

It certainly is only one data set, but does expose an unheard from inside point of view. I just handed out a blow-up of the curve asking “were you around here in the 90’s”, and “do you remember what happened here”, leading them a little until they proposed something they remembered going on that might have caused it. The file contains brief notes reflecting 50 good conversations with people, four audio file links, and my compilation of the reasons people gave.

It’s always great to get out and talk to people, and one rarely has something to ask them that is so central to their own lives and mysterious at the same time. Judge for yourself. Naturally I described what I could make sense of, but people raised some very interesting things.

Among the big missing pieces of data, from a systems point of view, is whether each city of NYS had the same trend as the aggregate (all of them together), and particularly whether the turning points for each city were all at the same time, or in sequence. That would suggest or rule out several paths of causation. One might also ask, did I bias my findings by possibly asking the questions in a way that determined the answer I got? People do indeed commonly find what they’re looking for because of that.

Well, I found something like I was looking for, but I tried to be careful about that. I did push people to recall what was going on inside the culture, events without names, things easily forgotten. From my own experience of living on West 96th street at the time I thought the turnaround might have had something to do with those amazing memorial murals that the wild style graffiti artists made on handball walls all over town for the families and friends of the victims of the street.

I never guessed that when I asked people about that specifically they would remember but not give it much importance. The timing and kind of message of those memorials sent is a good match for the timing and kind of change that occurred though… so who knows. That a huge sudden change in our local culture of such enormous importance would go essentially unnoticed is still the most amazing thing.