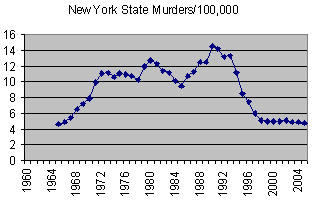 The curve of murder rates in New York State, from the 1960 to 2004 shows the great US crime wave, a little more dramatic in New York than elsewhere. Notice the shape of the sudden decline at the end.

It’s an exponential decay curve, (collapse to fading away) that continues. We knew the abrupt decline of the crime rates was mysterious. This is why.

Practically the only thing that could explain sudden collapse and decay of crime rates is if part of the crime culture was a living thing, and it died. Could that be? Yes, sure, think of the crimewave as representing a short lived culture, like a bigger and more complicated than usual fad. It could die for the same reason the Soviet Union collapsed and died, loosing it’s appeal to those involved. With the crime wave I think it may have been the crack cocaine that finally did it.

By the 90’s the ghetto anger of the 60’s was no longer fresh, there were limited but real gains in civil rights and economic opportunity to replace it, and crack was really messing up the drug lords’ lives, all combining to make the criminal lifestyle stop being cool.

To my surprise after posting the above (slightly edited now) I discovered the NY Times had an excellent Week In Review piece on the very subject, “Where Killers are Out of Style”. And I had a chance to discuss it at length with my criminologist friend John. He doesn’t see cohesive self-organizing natural systems behind everything that happens the way I do, but did admit that there was also an unexplained resurgence of New York City as a whole, highlighted by the rejuvenation of Times Square and the coming high tech. boom, at about the same time.

I don’t think any of these kinds of things are run from the mayor’s office, as Guiliani claimed over and over. Yes, the mayor did add police and got them back in the neighborhoods and to tend to quality of life crimes etc. That’s good, but it was in concert with a wave of good things happening, and crime didn’t decline proportionately, but collapsed, and nationwide, catching absolutely everybody off guard! Others have pointed to a statistical correlation between the states with the highest increases in abortion rates in the 70’s and declines in crime in the 90’s, but you can’t make a causal connection with that. It just says that both things tended to happen in the communities where the 60’s crime wave hit the hardest in the first place. Well, there’s no surprise about that! The abortion correlation doesn’t explain what the original eruption and its sudden resolution were about in the slightest.

I think most social trends display classic group behavior, swells and flows of culture that we’re all part of, but that no one clearly understands or controls. I see them as natural open system events like those of ecologies, or like storms and weather. They are much better treated as independently evolving living things in their own right. It definitely adds to the intrigue that they’re made from us and we can be quite unaware of them, they act dynamically as wholes and have no fixed parts or apparent structures, and have no spokesperson.

It’s hard to read culture without bias of course. I don’t have it documented, but in all the articles I’ve read about this, including this one, I don’t think I’ve read any mention of the observations on what happened from those most involved. That’s very odd. Someone surely must have noticed something being different, with the crime rate dropping by about 2/3! It would be good to find a way to ask.