of great transformative changes
shapes found in time traces, displaying the continuity formed by the cascades of change, serve as a guide map to creation and extinction. 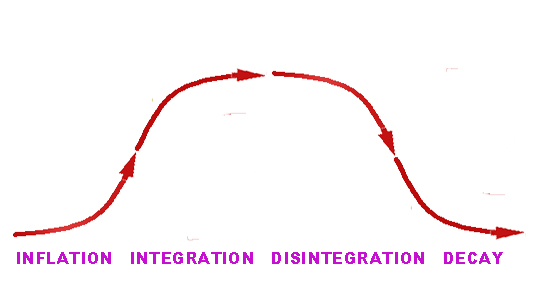 This idealized elementary sequence of growth dynamics, tracing change from beginning to end, represents the  most common and fundamental of the complex dynamics to be found.  The set sequence of shapes reflects a set sequence of local complex systems, arising from some small beginnings, concluding in small ends.  Each stage represents a separate necessary evolution of complex processes which may appear as simple as a bump on a curve, a heart beat, a storm, an epidemic, a thought.    Compare the model to something familiar to you, the course of your own emotional experiences or endeavors, the course of simple physical events like a single spark, a sound or a life.  Any event which can be traced from beginning to end can be informed by this model guide map to creation and extinction.

Don't let it fool you that passing events displaying this same shape are sometimes predictable from remote conditions.  The physical means of change is still required to bring them about whether the outcome is predictable or not.  Change arises and subsides by way of locally evolving mechanisms.  What we can most easily observe is that all change starts and ends with accelerating change, which then decelerates.   It reflects complex systems which do the same.   In some cases, as ideally represented here, these four complex processes occur in succession, as separate processes.   The shape of the curves is simple.   What makes them complex is that  complex local  networks of physical processes are needed to bring them about.  The underlying complex mechanism is reflected in whatever measure you choose to trace, providing corollary information about the central  mechanisms.

Please let me know what you think JL Henshaw

Integration [Stabilization] (+e^-; negative exponent increase; accumulating order with negative feedback of outputs to inputs) An initially inflationary system may change and approach a climax state of steady operation.  One might also call this phase 'maturation' or 'refinement' because it represents the shaping of the original inflationary system into a steady state system. The maturation of living things or the maturation of businesses provide good examples of the transition from compound growth to stabilization.  As with a flame which first grows and then reaches a climax, many examples of stabilization represent resource limitation.  Think of examples familiar to you, a maturing business plan, plant or ecology.   Self-sustaining mechanisms and stable structures develop by smaller and smaller steps toward a local perfection of their system.

There are also those which never stabilize, but only continue inflationary growth to a point of either their own internal collapse or an abrupt exhaustion of their resources.   A rocket engine is a good example of a flame which grows explosively but then reaches a steady burn rate, ending its inflationary period of development just short of ripping itself apart.  We hope humanity does at least as well in minding the inflationary growth of our impacts on the earth.

Steady State (balanced outputs to inputs, homeostasis) is the product of maturation.  Regular rules and expectations apply, even though the system involved may be exceedingly complex.   We simply do not need to be concerned with its complexity to predict its behavior.   That can not be said about the other types of developmental progression, which is part of why they remain mysterious.   During Integration and Decay the outcome may become clearer as time progresses.  During Inflation or Disintegration both the immediate and long term behavior may be quite hard to predict, and become less predictable as time passes.

Disintegration [Collapse](-e^+; positive exponent decrease; accumulating disorder with positive feedback of outputs to inputs) That relatively quiet time when things start falling apart usually goes unnoticed, only to catch us off guard as its disorder multiplies.   What often seems impossible from the view of a steady state in none-the-less inevitable, as all things must pass.  Whole industries begin to disappear, little noticed, as attention and resources are diverted elsewhere and as their misfit with current trends becomes more pronounced.   The disintegration of a family or political regime proceeds from small errors to large catastrophes.    Materials which first show signs of wear then more and more rapidly disintegrate.